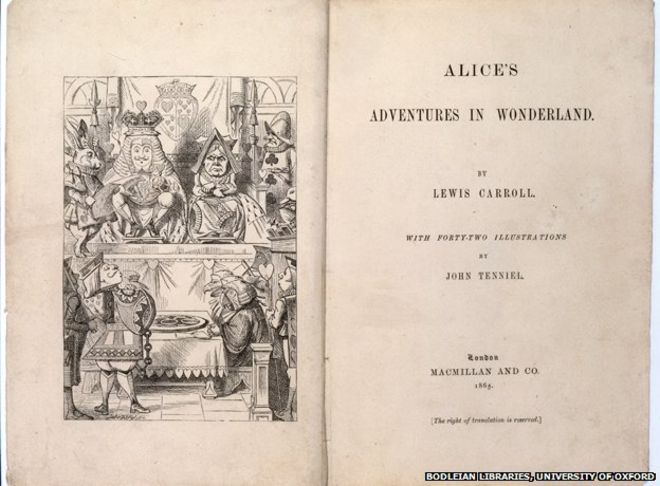 Curiouser and curiouser! Back in the day (more like waaaay back) in 1865, a novel was written by English mathematician Charles Lutwidge Dodgson under the pseudonym Lewis Carroll. That novel was Alice’s Adventures in Wonderland. It’s doubtful that he knew the impact that his works would someday have, from the controversy over whether or not he’d been on drugs while writing the books (all signs point to…maybe?), to the plentiful adaptions and fan dedication the Alice books would receive. Then again, maybe Carroll did know there’d be such an impact to what he’d created. It’s not every day a book comes along about girls falling into different worlds full of magical creatures (well, it wasn’t in the 1800’s at least).
Cut to present day, where his stories have spawned dozens of adaptions across all types of media. A new Alice adaption, Queen of Hearts by Colleen Oakes is coming out on May 3rd, and so to celebrate the wonder (pun intended) that is Alice in Wonderland, we wanted to put together a list of our favorite Alice in Wonderland adaptions!

1. Queen of Hearts by Colleen Oakes

This is not the story of Wonderland we know. Alice has not fallen down a rabbit hole. There is no all-knowing cat with a taunting smile. This is a Wonderland where beneath each smile lies a secret, each tart comes with a demand, and only prisoners tell the truth. The first novel in Colleen Oakes’s epic, imaginative series proves heroes can become villains and fairy tales can become nightmares. This is not a story of happily ever after. This is the story of the Queen of Hearts. Add it to your Goodreads shelf here!

This Disney animated feature is a classic and the first adaptation of the literary tale on any kind of screen and this version of the story is actually a combo of the two books by Lewis Carroll: Alice’s Adventures in Wonderland and Through the Looking Glass. Did you know? This was the first Disney theatrical film to be shown on television, in 1954!

In Tim Burton’s live-action version of Alice in Wonderland, nineteen-year-old Alice (played by Mia Wasikowska) returns to the magical world from her childhood adventure, where she reunites with her old friends (Johnny Depp plays the Mad Hatter!) and learns of her true destiny: to end the Red Queen’s reign of terror.

This YA trilogy is heavily inspired by original classic stories but the premise is that the two books written by Lewis Carroll are actually a distortion of the ‘true story’. And the ‘true story’ is the portrayed in these novels by Frank Beddor. Check it out on Goodreads here.

This spinoff from the Once Upon A Time TV series on ABC was only around for one season but will were still fans of it! One interesting piece of trivia for this short-lived show: the Jabberwocky is not the name of the monster in Lewis Carroll’s sequel to Alice’s Adventures in Wonderland (Through the Looking Glass.) The monster itself is actually called just the Jabberwock.

To avenge her family, Ali must learn to fight the undead. To survive, she must learn to trust the baddest of the bad boys, Cole Holland. But Cole has secrets of his own, and if Ali isn’t careful, those secrets might just prove to be more dangerous than the zombies. Don’t miss out on all four books in this series: Alice in Zombieland, Throught the Zombie Glass, The Queen of Zombie Hearts, and A Mad Zombie Party by Gena Showalter!

This UK TV movie came out in the late 90s starring a blonde, pre-fame Kate Beckinsale and is delightfully weird and, well, 90s. Take a look at the trailer to see for yourself!

Alyssa Gardner hears the whispers of bugs and flowers—precisely the affliction that landed her mother in a mental hospital years before. This family curse stretches back to her ancestor Alice Liddell, the real-life inspiration for Lewis Carroll’s Alice’s Adventures in Wonderland. Alyssa might be crazy, but she manages to keep it together. For now. Check out this YA series on Goodreads!

The sequel to Tim Burton’s Alice in Wonderland film feature is about to hit theaters this summer and we can’t wait to see it! In it, Alice returns to Wonderland (and so does the entire cast from the first movie) and travels back in time to save the Mad Hatter!

What are your other favorite Alice in Wonderland adaptations? Tell us about the ones we missed in the comments below!