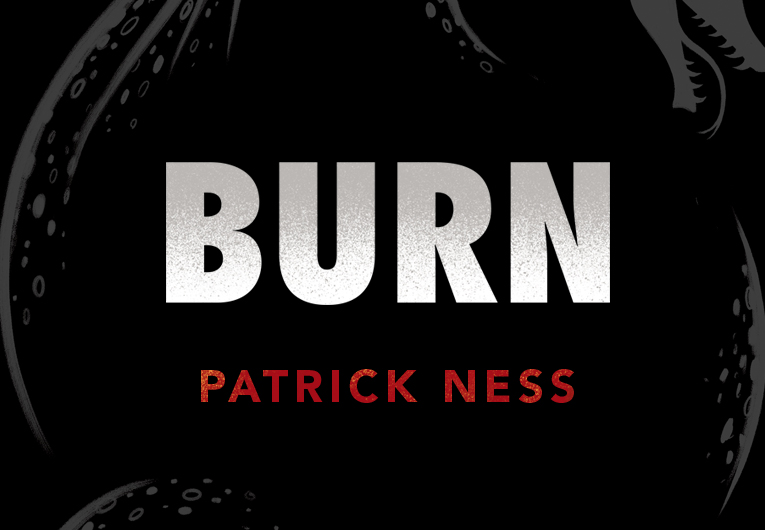 As a reader, the name ‘Patrick Ness‘ is hopefully familiar to you. You might know him as the author of the pulse-pounding Chaos Walking trilogy. Or, it could be from that time A Monster Calls tore your heart to shreds. Maybe it was his one-of-a-kind take on the “chosen one” trope in The Rest of Us Just Live Here. It could’ve been Release, And The Ocean Was Our Sky, Class… honestly, the list goes on. You probably get it.

This is all to say that Patrick Ness has an impressive and expansive writing career. And today, we’re incredibly excited to show you his forthcoming novel, Burn!

Burn hits shelves June 2nd, and is something entirely new from Patrick Ness. There are dragons. There’s fire. We’re in the Cold War. And, oh, there’s one hell of a prophecy. As lovers of both killer stories and cover design, we were lucky enough to see a bunch of different incarnations of the cover before the final design was reached! We owe a giant thank you to Erin Fitzsimmons, HarperCollins’ Art Director, and Jim Tierney, the cover illustrator and designer, for sharing all of these possibilities with us. Plus, a round of applause because they all look really freaking cool.

The first of the concepts we’re going to show you is, fittingly, fire. With a title like Burn, you can anticipate some heat. The pattern of flames on this set of cover concepts is SO mesmerizing. 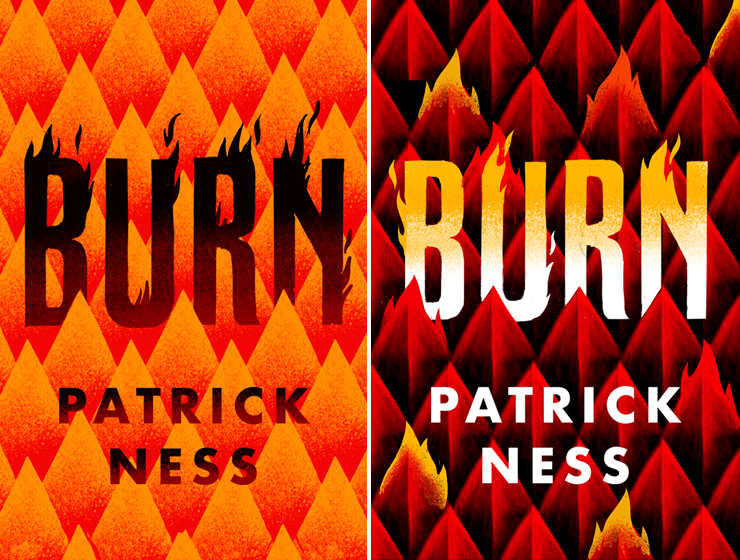 Another concept features a farm, and plays more with the setting of the novel. Our main character, Sarah, lives on a farm with her father, and their initial introduction to the dragon happens as they intend to hire him to work on their farm work. 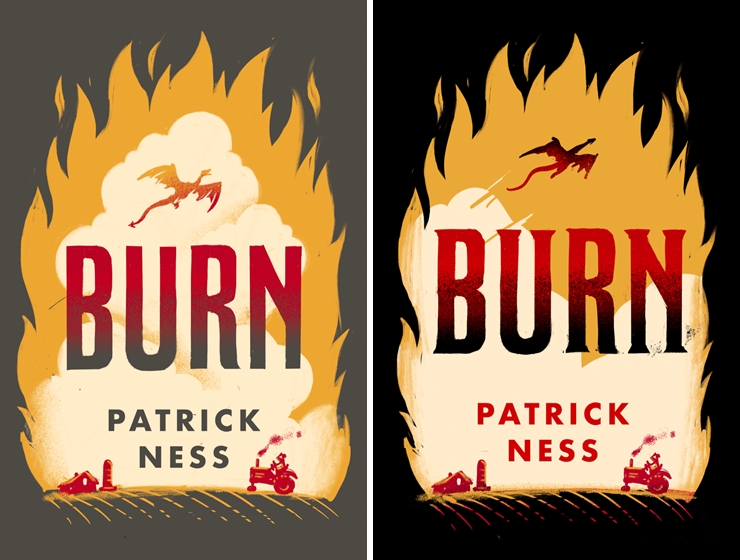 In the following cover directions, you see the concept of a dragon buried in flames, and we see its tail peaking out from the fire. It’s an amazing concept, and the perfect bridge to the final cover design concept… 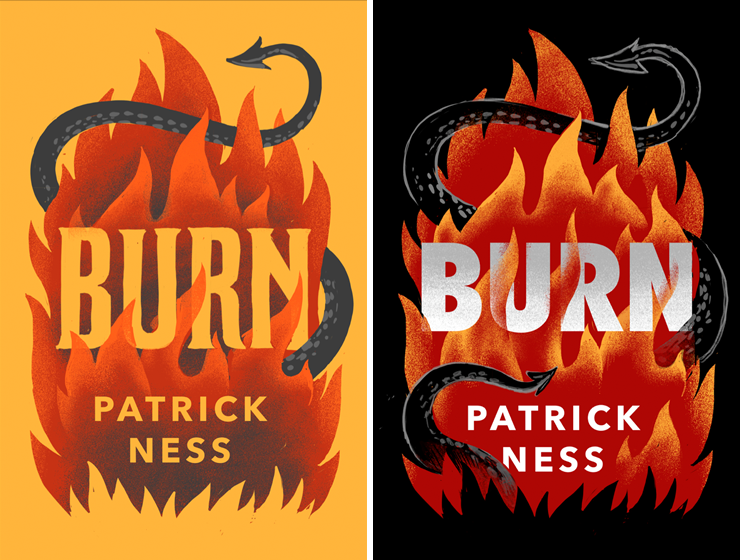 A dragon emerging from the flames. The imagery of the beast being engulfed in fire felt like it really encompassed this fantastical story. A few options were provided, below, before the final cover was decided. 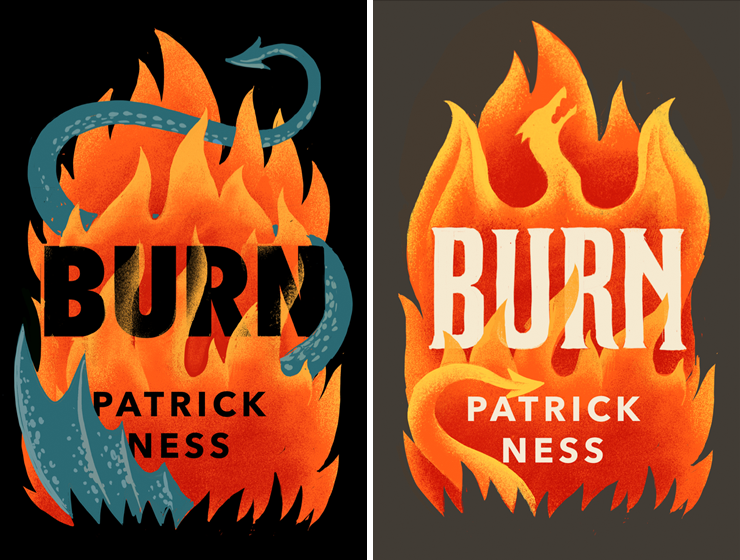 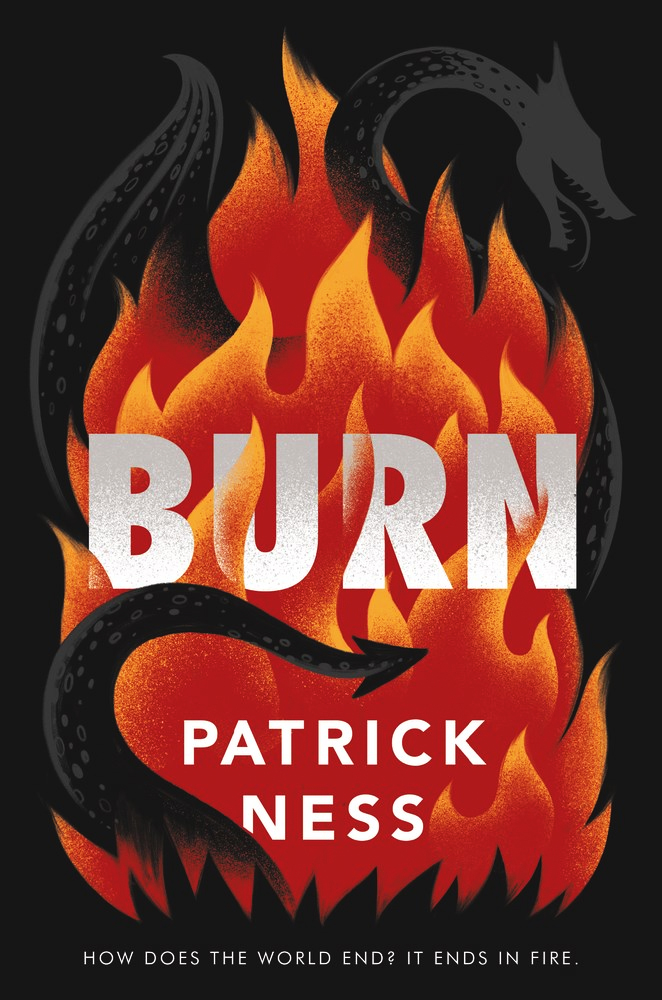 If we weren’t already dying over every single element this story is bringing to us, its cover alone would spark an obsession anew. It has just the right balance of every element that was touched upon and looks equal parts ferocious and beautiful. The perfect combination, tbh!

On a cold Sunday evening in early 1957, Sarah Dewhurst waited with her father in the parking lot of the Chevron gas station for the dragon he’d hired to help on the farm…

Sarah Dewhurst and her father, outcasts in their little town of Frome, Washington, are forced to hire a dragon to work their farm, something only the poorest of the poor ever have to resort to.

The dragon, Kazimir, has more to him than meets the eye, though. Sarah can’t help but be curious about him, an animal who supposedly doesn’t have a soul, but who is seemingly intent on keeping her safe.

Because the dragon knows something she doesn’t. He has arrived at the farm with a prophecy on his mind. A prophecy that involves a deadly assassin, a cult of dragon worshippers, two FBI agents in hot pursuit—and somehow, Sarah Dewhurst herself.