Winterians, are you emotionally prepared to gaze upon the cover for the third and final book in your beloved Snow Like Ashes series by Sara Raasch? Well, you better be, because it’s here! It is going to look absolutely stunning sitting next to your copies of Snow Like Ashes and Ice Like Fire when it goes on sale September 20, 2016!
Before we get to the gorgeous cover, here is what author Sara Raasch has to say about it!
Here are Sara Raasch’s thoughts on the design. Say hi to Sara on Tumblr:

“As someone with very little talent in the field of design, I never really know what to expect when I get that cover email. After the ivory prettiness of Snow Like Ashes and the dark, foreboding feel of Ice Like Fire, I had a general idea of what Frost Like Night might look like (a chakram, the four seasons, the title all big and bold and gripping) — but when I saw it for the first time, I just sat there, open-mouthed, telling myself ‘This is the work of art my book gets to wear.’
Each of these covers has been more intense than the last, building this iconic progression that will forever leave me speechless. Erin and Jeff — you guys have dressed my books in masterpieces. Thank you.”

Now it’s time to see the cover!
Wait, just kidding. First let me tell you what the book is about. (Be patient, dear reader. We’re getting to the cover…eventually….)
Angra is alive, his Decay is spreading—and no one is safe.
Meira will do anything to save her world. With Angra trying to break through her mental defenses, she desperately needs to learn to control her own magic—so when the leader of a mysterious Order from Paisly offers to teach her, she jumps at the chance.  But the true solution to stopping the Decay lies in a labyrinth deep beneath the Season Kingdoms.  To defeat Angra, Meira will have to enter the labyrinth, destroy the very magic she’s learning to control—and make the biggest sacrifice of all.
Mather will do anything to save his queen. He needs to rally the Children of the Thaw, find Meira—and finally tell her how he really feels.  But with a plan of attack that leaves no kingdom unscathed and a major betrayal within their ranks, winning the war—and protecting Meira—slips farther and farther out of reach.
Ceridwen will do anything to save her people. Angra had her brother killed, stole her kingdom, and made her a prisoner.  But when she’s freed by an unexpected ally who reveals a shocking truth behind Summer’s slave trade, Ceridwen must take action to save her true love and her kingdom, even if it costs her what little she has left.
As Angra unleashes the Decay on the world, Meira, Mather, and Ceridwen must bring the kingdoms of Primoria together…or lose everything.
Frost Like Night goes on sale September 20, 2016. Pre-order a copy here!
Add it to your Goodreads shelf!

Now…are you ready to see the cover? 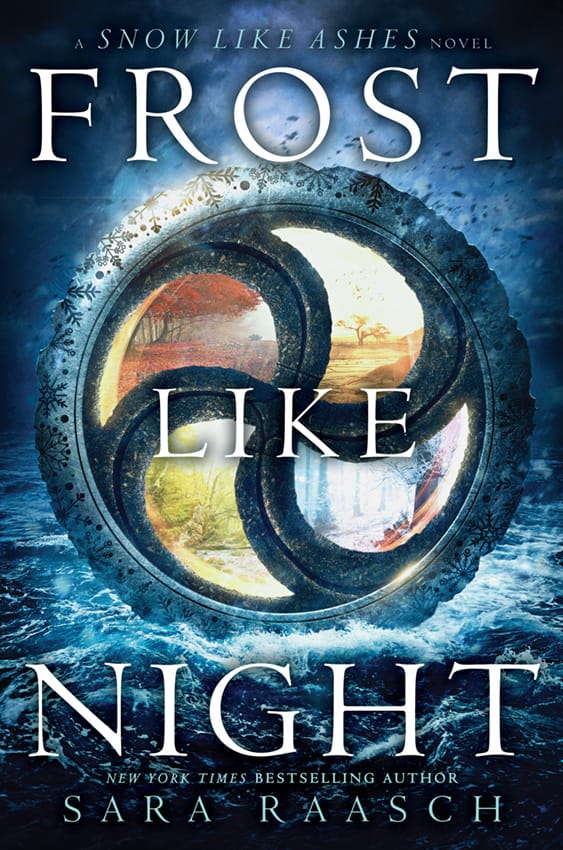 ajldkfhadslkjfhalsdjkfhalsdkjfhaldskjfhaldsjkhf OMGITSSOBEAUTIFUL!!!!! Look at how gorgeous Frost Like Night is with the other two books in this kickass series! BE STILL MY COLD WINTER HEART. 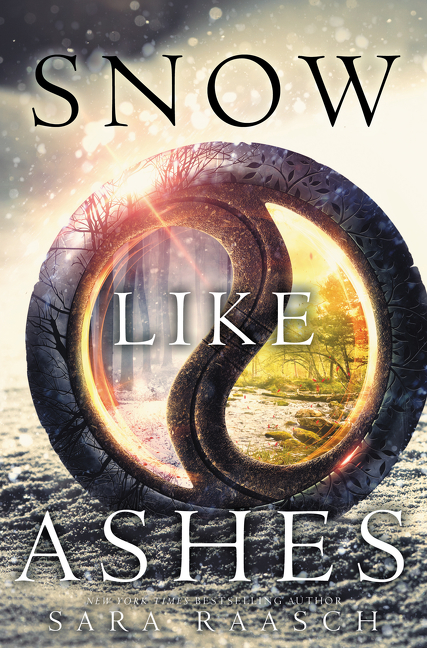 Q&A with the Cover Designers

Now we have an extra special treat for all you book design nerds! Read on for a quick interview with Erin Fitzsimmons, the HarperCollins designer who put this gorgeous cover together, and Jeff Huang, the digital artist who created all of the art you see on the Snow Like Ashes series covers!
This is Erin and this is Jeff! 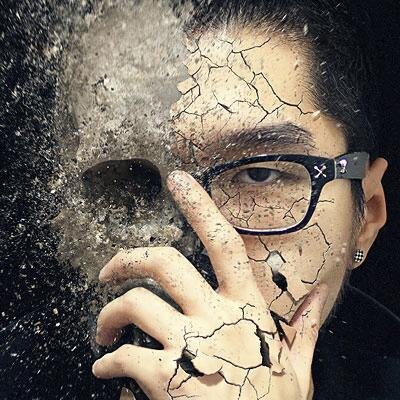 This cover is so epic! Knowing this was the last book in the series, how did you approach the design process?

Erin: Thank you! We tried to amp up the epic factor on each cover, and between the beautiful night sky and the turbulent waves, I’m glad we were able to achieve it! We had the concept pretty much set from the beginning. We knew it was going to be night, and the color palette was a deep blue. After discussing the book with the editor, we thought water and waves would be a cool element to work with, and Jeff took it to the next level!

What was the creative process behind the evolution of these covers? How did you decide upon the stormy water for the final book?

Jeff: The evolution of the covers came naturally for me. From the day I that I grasped the initial concepts for the trilogy, I knew I wanted to show the age and evolution of the chakram as the books progressed. Along with the chakram progressively more worn down, I also wanted to build tension through the environments of these book covers. Snow Like Ashes was supposed to be calm before the storm, Ice Like Fire was the big bang, and Frost Like Night depicts the chaotic aftermath. My hope is that readers can see my initial vision of the evolution of the trilogy, and appreciate the artwork based on that concept.
Erin: I was very lucky to have titles for all three books when I first started designing for this series. Between the titles, and a strong concept for the cover, I mocked up three rough covers at the very beginning to show how the concept could progress and how the color palettes would change. I had always planned for book three to be a deep blue night scene, and the water seemed like the perfect element to tie it together. I love that the first two covers have such subtle colors, but we were able to bring it lots of color for the final book in the series!

How much of the book are you typically able to read before you have to start designing/creating art?
Erin: I read all of Snow Like Ashes, pretty much in one sitting! It was amazing!! But in the rare case that we’ve designed the entire series from the first book, we don’t often go back to finish reading the series, so we rely heavily on the editor to provide information about the story. At this point, I’m waiting until books 2 and 3 are finished so I can binge read them back-to-back. That’s more fun anyway, isn’t it?
Jeff: Honestly, I’m ashamed to say that I still have yet to read through any of the books. Having done many book covers in the past, I tend to only need a brief summary and knowledge of key scenes/characters/elements and I just let my imagination take off. It helps a lot that Erin and I work very well together. She is great at providing me with briefs and any visual mood boards and/or sketches of her ideas. From there, I do my best to interpret that and incorporate my own imagination. So far, it seems to have worked out flawlessly between us!

Naturally the chakram and seasons were pulled from the world of the books, but how much do elements of each book influence the design process?

Erin: One of my favorite parts about designing covers is getting to hide elements in the covers that you might notice but no one else will. For this series, we were also able to incorporate the symbols of the other kingdoms into the edges of the chakram! It’s subtle, but all the kingdoms play such a role in the books that we’re excited to be able to feature them on the cover.

The Snow Like Ashes series has a very distinct look with the chakram image repeated throughout. Does that repeated imagery make designing each cover easier or harder? How so?

Jeff: The chakram being the foundation of the 3 covers was something that I was content with from the very beginning when I worked on Snow Like Ashes. Whenever I work on a trilogy, I always try to find and develop a special element that becomes the foundation and ties the book covers together – and that was the chakram in the Snow Like Ashes series. It may sound odd, but having a consistent element makes the design process both easier AND harder. It is easier in the sense that you have an element you can focus on, but it’s harder because you can’t simply copy and paste that same element over to the other covers. The creative challenge is figuring out a way to show evolution of the constant element while being able to convey the feeling of the specific book. I’m personally happy with the evolution of the chakram through the 3 books, and I hope the readers are as well!

What is your favorite element of the FROST LIKE NIGHT cover? Which is your favorite cover in the series?
Jeff: Since this is the final book cover, I took extra care to make sure everything was perfect. I don’t know if I have a favorite element, but I am happy about the fact that the 4 scenes inside the chakram flow very nicely together – I made sure of that. I also really like the deep blue color palette we went with in the end, and I believe the waves in the ocean along with the dark stormy sky create the perfect mood for the last book. As far as choosing my favorite cover for the series, I’m going to have to plead the fifth. That’s like asking a parent to choose his/her favorite child! I love them all equally! 🙂
Erin: My favorite element is definitely the water and the waves. They are stunning, and I am so excited to see how they will print on our final jackets with the metallic ink specs. I’m with Jeff on this one — I can’t choose a favorite, but I’m just so, so happy with how all three covers work together as a series! Being able to take a concept for three books from the very beginning and execute it the entire way through is the greatest thing an art director can ask for!

What’s your favorite part of the art/design process?
Erin: As an art director, my favorite part of the process is developing rough ideas for a cover and then finding artists I think can bring the ideas to life. Jeff is easily one of the best artists I have worked with. We’ve worked together on a number of projects so far (including some very exciting repackages that are yet to be revealed!) and every time I feel confident that Jeff is going to take my ideas and run with them, and turn in something entirely fresh and innovative. He always finds a way to take my ideas and make them better, and that’s an incredible feeling!

Winterians! What do you think of the cover? Tell us in the comments below!