Cover Reveal: TEN THOUSAND SKIES ABOVE YOU by Claudia Gray

Fans voted A Thousand Pieces of You by Claudia Gray as the best cover design in the 2014 Book Shimmy awards and today we’re revealing the cover for the book’s sequel, TEN THOUSAND SKIES ABOVE YOU! In this sequel, Marguerite struggles to save the boy she loves, whose soul is scattered in various dimensions.

Haven’t read A Thousand Pieces of You yet? Here’s what you need to know about the first book in this universe-bending young adult series:

Cloud Atlas meets Orphan Black in this epic dimension-bending trilogy by New York Times bestselling author Claudia Gray about a girl who must chase her father’s killer through multiple dimensions. Marguerite Caine’s physicist parents are known for their groundbreaking achievements. Their most astonishing invention, called the Firebird, allows users to jump into multiple universes—and promises to revolutionize science forever. But then Marguerite’s father is murdered, and the killer—her parent’s handsome, enigmatic assistant Paul—escapes into another dimension before the law can touch him.
Marguerite refuses to let the man who destroyed her family go free. So she races after Paul through different universes, always leaping into another version of herself. But she also meets alternate versions of the people she knows—including Paul, whose life entangles with hers in increasingly familiar ways. Before long she begins to question Paul’s guilt—as well as her own heart. And soon she discovers the truth behind her father’s death is far more sinister than she expected.

After we reveal the cover, keep scrolling for important information on the design from Claudia!

But now, it’s time to feast your eyes on the absolutely gorgeous cover for Ten Thousand Skies Above You! 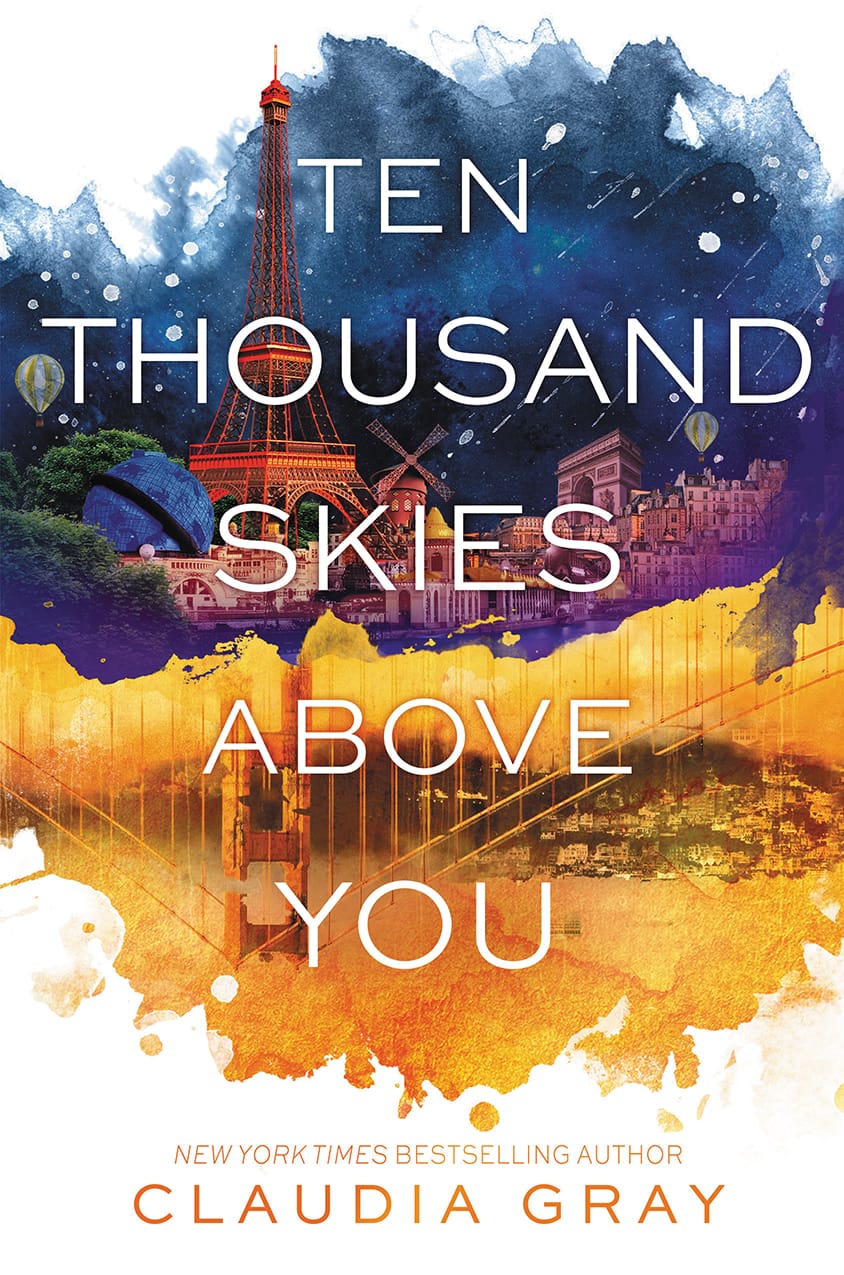 About TEN THOUSAND SKIES ABOVE YOU:

Marguerite Caine has done the impossible, traveling to alternate dimensions with the Firebird—the brilliant invention of her parents, her boyfriend, Paul, and their friend Theo. But she has also caught the attention of enemies willing to kidnap, blackmail, and even kill to use the Firebird for themselves.
When Paul’s soul is splintered into four pieces—pieces that are trapped within Pauls in other dimensions—Marguerite will do anything, and travel anywhere, to save him. But the price of his safe return is steep. If she doesn’t sabotage her parents in multiple universes, Paul will be lost forever.
Unwilling to sacrifice her family, Marguerite enlists the brilliant Theo to help. The two forge a plan to save Paul and the Firebird, but succeeding means outsmarting a genius and risking not only their lives but also the lives of their counterparts in every other dimension.
Their mission takes them to the most dangerous universes yet: a war-torn San Francisco, the criminal underworld of New York City, and a glittering Paris where another Marguerite hides a shocking secret. Each leap brings Marguerite closer to saving Paul—but her journey reveals dark truths that lead her to doubt the one constant she’s found between the worlds: their love for each other.

Top 5 Things You Ought to Notice About This Cover

All the important things you need to know, according to Claudia Gray!

1) The title – TEN THOUSAND SKIES ABOVE YOU.

What do you think? I wanted something to suggest the way Marguerite and Paul (and Theo, as well as all the rest) find each other in these infinite parallel universes. So we have ten thousand changing skies, but the same souls together beneath them. It took a long time to brainstorm the best titles for the rest of the Firebird trilogy, but I’m thrilled with the results.

Never did I think the sequel’s cover would be as pretty as the one for A THOUSAND PIECES OF YOU, but I think the designers pulled it off, don’t you? As lovely as the pink/purple/blue color scheme was for the first book, I love this rich blue and orange just as much. And it makes me so happy to get to portray more of the various universes on the covers. (I’ll even reveal one exclusive design secret: We had a hard time deciding which of the universes to portray this go around, because there were so many inviting options! Some other rather scenic places didn’t quite make it, which means I’ll always wonder what they would have looked like on a cover.)

3) Yes, that’s Paris. But not quite the same Paris you’d find if you hopped on a transatlantic flight tomorrow.

The sights featured are the ones you’d have visited a century or more ago, such as the Moulin Rouge, even its famous elephant. This is as good a time as any to repeat: There’s no such thing as time-travel in this series. However, as Marguerite has discovered, different universes develop at a different rate – politically, socially, technologically, you name it. So while she remains in the same hour of the same day of the same year, she can still wind up in what feels like a bygone era or a far-distant future. It all depends on a turn of the Firebird.

4) What’s up with San Francisco?

At first glance, the Golden Gate Bridge probably appears as stately as usual – but look closer. If you do, you’ll notice that the bridge has taken some damage, and the rest of San Francisco seems to have been through some rough times lately too. Marguerite has been to some far-flung countries during her journeys so far, but the strangest destination of all can be a radically different version of the place she calls home.

There’s one little touch in the Paris illustration I’d especially like you guys to notice: the hot-air balloons. Why are they so special? Well, originally they were on the cover for A THOUSAND PIECES OF YOU. Pretty as they were there, however, they were hanging over the Russiaverse in winter … which didn’t make a whole lot of narrative sense. So out they went. Then, when this cover was in progress, everyone agreed we needed a little more detail in Paris. The balloons returned to finally get their moment to shine.
###

Ten Thousand Skies Above You goes on sale November 3, 2015! Tell us what you think of the cover in the comments below!