To kick off #CoverReveal week, we’re revealing the buzzworthy (that’s a pun, you’ll see why in a minute) cover for BONE GAP by Laura Ruby! Stay tuned, because after the reveal we have an in-depth Q&A with the Laura!

Before we can show the very cool cover, here’s what you need to know about the book:

Everyone knows Bone Gap is full of gaps—gaps to trip you up, gaps to slide through so you can disappear forever. So when young, beautiful Roza went missing, the people of Bone Gap weren’t surprised. After all, it wasn’t the first time that someone had slipped away and left Finn and Sean O’Sullivan on their own. Just a few years before, their mother had high-tailed it to Oregon for a brand new guy, a brand new life. That’s just how things go, the people said. Who are you going to blame?
Finn knows that’s not what happened with Roza. He knows she was kidnapped, ripped from the cornfields by a dangerous man whose face he cannot remember. But the searches turned up nothing, and no one believes him anymore. Not even Sean, who has more reason to find Roza than anyone, and every reason to blame Finn for letting her go.
As we follow the stories of Finn, Roza, and the people of Bone Gap—their melancholy pasts, their terrifying presents, their uncertain futures—acclaimed author Laura Ruby weaves a heartbreaking tale of love and loss, magic and mystery, regret and forgiveness—a story about how the face the world sees is never the sum of who we are.

Ready for the cover? 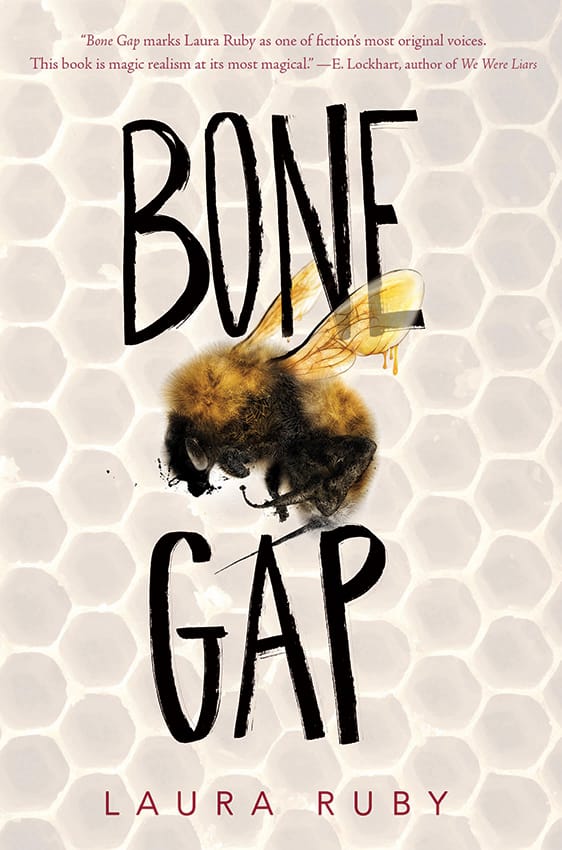 BONE GAP marks your return to YA literature, and it’s such a beautiful, brilliant, powerful novel. What inspired you to write the story Finn, Roza, Sean, and the people of Bone Gap?

Thank you! Some stories come to me because I hear the voice of a character.  More come to me because I’m obsessed with a certain “what-if” scenario—“What if a girl was haunted by not one but many ghosts?”  or “What if a so-called ‘good girl’ was photographed in a compromising position and the photo was sent to everyone she knows?”
BONE GAP came to me in an entirely different way, out of a set of random experiences that somehow coalesced in my head.  My late father-in-law handed me an article about a woman who had lost her child at a fair and could not find him for reasons she didn’t understand. I visited a school in rural Illinois and met the son of a farmer, a kid so mature and polite that he seemed to be out of another century. I met a fabulous woman at another school visit in Wisconsin, a woman who invited me up to see her barn, meet her horse and talk to her daughter, a fierce and fearless equestrian.  At a graduation party, a whip-smart, charming teen named Miguel and I compared our freakish arms to see whose were longer (we declared it a tie). My dad told me stories about running the horses on his grandfather’s farm, horses with evocative names like Gladiola and Thunder.  And my husband’s aunt died, the last of his family that spoke any Polish.
But more any of these experiences, BONE GAP came about because I spent years toiling over an entirely different novel.  Usually I bounce from project to project to keep from getting bored, but for some reason, I had decided that grown-ups simply do not bounce from book to book like toddlers on pop-rocks; grown-ups start one novel and do not stop till they’re finished with that novel. Day after day, month after month, I worked and reworked the book, but couldn’t figure out how to end it. Finally, exhausted and defeated, I allowed myself to give up.  And it was only after I walked away that I saw the real story I needed to write was not the one I had spent so much time on, but rather a story about a small town in rural Illinois, a town with charming farm boys mature beyond their years, fierce and fearless girls who speak the language of bees and of horses, and horses as memorable as people—all with secret wounds not even they can understand.

We love the symbolism of the bee on the cover. What can you tell readers (no spoilers!) about how the bee relates to the story?

One of the major characters is the daughter of the local beekeeper, an unusual looking girl who is the object of a lot of scrutiny and rumor. In part, the book explores how we view girls and women in our culture (as decoration, as sex object, as property).  It’s also about the magic of nature. To me, there’s nothing more magical than a colony of bees, and of course bee colonies are, for the most part, female, so…

BONE GAP also contains elements of the Persephone myth. How deeply rooted in the myth is the novel?

I’ve always been both fascinated and infuriated by the story of Persephone, mostly because the story isn’t about her per se; it’s about how a girl was kidnapped by one uncle and her other uncle helps cover it up to fool her mother, Demeter.  It’s about men simply taking what they want and a mother having to out-and-out starve the world just to achieve a half-measure of justice.  Persephone herself is just a pawn; she has no voice.
That said, though I did want to give voice to a girl who goes missing, BONE GAP is only very loosely inspired by the Persephone myth and the myth of Cupid and Psyche, as well as the various roles Hermes played in other myths.  It was also important for me to root the magic of the book in the geography and the culture of the Midwest and the people that live and work there; I wanted the Midwest to feel mythic.

There are so many important themes in BONE GAP, including the struggle to figure out who you are and where you belong. What do you hope young readers take away from the novel?

As I wrote this book, I was thinking about the way we look at people, and also the way we are seen, especially by the people we love. But what a particular reader gets out of a book depends so much on what that reader brings to a book.  My goal is always to tell a good story, an intriguing story.  If I’ve given a reader something to think about, if the story stays with that reader in some way, then I’m happy.

One last question: Have you ever been to any real-life towns that are like Bone Gap?

Funnily enough, there is a real town in rural Illinois called Bone Gap, though folks there might be a bit surprised to find out that their town is riddled with whispering corn, magical swaths of forest, and quasi-mythological old men who let chickens roost in their living rooms.
Or maybe not.

What do you think of the cover? Tell us in the comments below!