Defy Me (Shatter Me #5) Recap: What You Need to Know 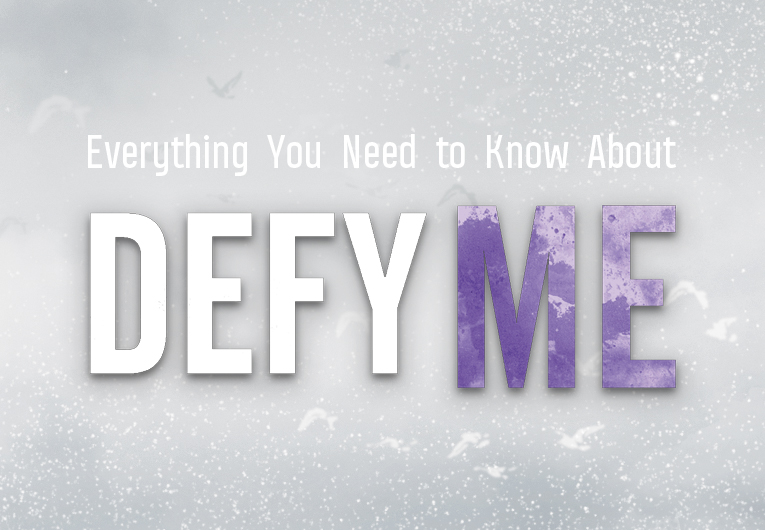 We just have to say, Tahereh Mafi did it again with Defy Me.

Right from the first page, we were IN! And then we had our minds blown for next 356 pages. Without spoiling anything (yet—spoilers to come) there are some big changes in this book. For one, it’s the first full length novel in which Kenji gets a perspective!!! Even more, we get to learn more about this cast of character’s before we came to meet them in Shatter Me.

For anyone who wants a refresher before dipping into this recap, we have recaps for Shatter Me, Unravel Me, Ignite Me, and Restore Me. And now is the perfect time to recap, as the final book, Imagine Me, is just around the corner!

Defy Me Recap: Everything You Need To Know

Now, from here on out, there are SPOILERS!!!

And once more for good measure, SPOILERS!!

It wasn’t a death… it was a perfect illusion.

Remember when we thought Juliette accidentally slaughtered hundreds of people with her voice? Well, sike! Don’t get it wrong, Juliette is a powerhouse. But the symposium didn’t quiet play out like we first thought. It was a set up, and next thing you know…

In the aftermath of the tragedy, Kenji realizes Juliette and Warner are gone (because he’s narrating!!!). Someone has kidnapped them—Juliette’s parents! Unfortunately, team Omega Point needs to flee or risk sticking around in a room of very confused and angry people.

Through a series of flashback and memories resurfacing while in captivity, we learn some pretty jaw-dropping details. Contrary to our prior knowledge Juliette and Warner have actually known each other for years! They grew up together!! Unsurprisingly, they were in love. AND THEN HAD THEIR MINDS WIPED BY THEIR OWN PARENTS SO THEY WOULD FORGET! Speaking of parents…

Meet Max and Evie Sommers, currently holding Juliette and Warner in captivity, and casually torturing them. Juliette’s parents are pretty much the absolute worst. Through extreme pain, they want to reset Juliette, remake her to be their weapon. We repeat: they are the worst.

Juliette’s real name is Ella. Ella Sommers. It’s a fact that our cast of characters need some time getting used to. You know, in between trying to not die.

Kenji!!! And Nazeera!!! Kiss!!! But it doesn’t end well. Their friends are missing and for a whole other list of reasons #itscomplicated. They do, however, set flight to rescue Juliette and Warner.

Paris Warner!! Last time we saw him, Juliette, you know, shot him. Twice. But it seems the old Supreme Commander survived with a little healing. Warner, his son, doesn’t take the news so well and attempts to murder him. Again.

Ella and Emmaline Sommers. Two girls who have been through too much. Juliette finds her sisters at her parents’ compound, floating in a vat, experimented on so heavily that she no longer appears humanoid—her powers have grown too strong for her body. Emmaline frees Juliette from the power-suppressing manacles she’s been and begs for Juliette to kill her. Juliette can’t do it. She does do something for Emmaline though. She rips their mother’s heart out (!!!!) and promises to return for Emmaline.

Kenji and Nazeera to the rescue.

The reluctant lovebirds arrive at the compound where Juliette and Warner are being held, and manage to help them escape. And with Emmaline’s help, their mission is a success! They make it onto the plane and fly away!

They do, however, get shot out of the sky! Luckily, the team is equipped with the abilities to safely make a landing. Even more luckily, their assailants weren’t hostile, it was Castle who met up with his daughter and the rest of the rebellion!

It’s my birthday, I’ll propose if I want to.

Amidst all the chaos they’ve just survived, Warner proposes to Juliette!!!!!!!! She agrees, and then they celebrate his birthday. We get to see them happy, and after everything they’ve just been through, thank you Tahereh!

In discussing next steps, Juliette realizes she needs to fulfill Emmaline’s wishes after all. Juliette’s parents were using Emmaline, projecting her power over the world and distorting reality. The world isn’t as destroyed as they’ve been led to believe! Juliette needs to return to her sister and relieve her from the tortured prison in which she’s being kept.

And that’s where we leave off on Defy Me. Is anyone else sweating right now?! We’re not sure we’re emotionally prepared enough for what’s to come in Imagine Me.