Wicked is good. Good is wicked. Four books, nine novellas, too many wicked characters to count, and one evil bitch who just won’t die! We can’t believe the Dorothy Must Die series comes to a conclusion in THE END OF OZ!
Danielle Paige’s twisted series took us to the dark side of the rainbow, and to celebrate this imaginative twist on The Wonderful Wizard of Oz, we’re revealing the exclusive Dorothy Must Die artwork below! On the left side of this image are the sweet and innocent characters we all loved in the original book by L. Frank Baum, and on the right are their evil counterparts in the Dorothy Must Die series! ARE YOU READY FOR THIS?
Click on the image below to view it at a larger size!

In honor of this showdown between the Good and Wicked versions of Oz, let’s recap the most epic face-offs in YELLOW BRICK WAR, book 3 in the Dorothy Must Die series!
Need a refresher on the first two books first? We got you.

There are so many epic battles that take place in Yellow Brick War so we’re going to recap this book for you via all of those battles! 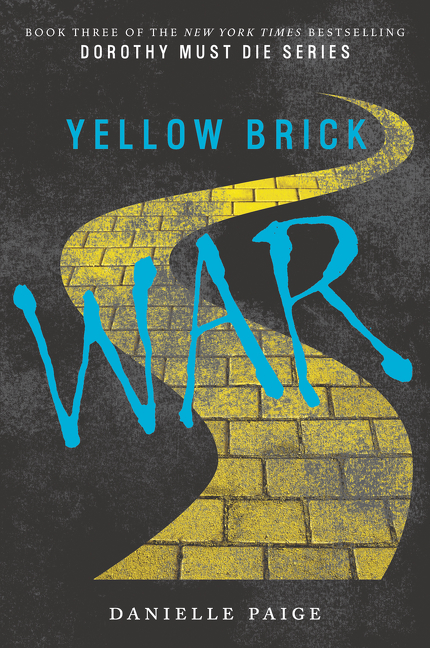 GLINDA VS. THE ORDER

The Revolutionary Order of the Wicked are all hiding out in an abandoned palace when Glinda and her army show up, operating behind Dorothy’s back to take over Oz. While Glamora battles her sister one-on-one to distract her, Amy & crew and fight their way through Glinda’s creepy female army to try and rescue Ozma, who is being held hostage.

During the battle, Amy tries to use the magic shoes but they are still connected to Dorothy, who now knows where she is and shows up riding a magically transfigured, monster version of Toto. Dorothy is furious Glinda has betrayed her and brings her own army of the Tin Man’s horrible metal creations to attack everyone. Amy uses her magic to briefly transform into a monster and cuts off Toto’s head. Dorothy flees the scene and Glamora is about to kill Glinda when Glinda transforms into a mysterious pink light that flows into Glamora’s body—creating a weird hybrid of the two sisters.

Amy and Nox head inside the Emerald Palace to try and stop Dorothy from sapping up the last of Oz’s magic. They find Dorothy in a cavern under the Palace next to a magical pool of water she is using to give herself all of Oz’s power. Amy & Nox break Dorothy’s connection to the magical pool, creating a shock wave that causes the Palace to begin to crumble. Amy is about to stab Dorothy to finish her once and for all, but stops herself because she doesn’t want to be a monster anymore. Instead, Amy and Nox escape and just let the Palace collapse on top of Dorothy.

NOME KING & GLINDA/GLAMORA VS. THE ORDER

While everyone is busy celebrating Dorothy’s alleged death, it turns out Glinda has been stealing control of Glamora’s body. Glinda opens a portal to Kansas and summons the Nome King and Amy’s former high school nemesis Madison Pendleton. The Nome King threatens to torture Madison unless Amy gives up her magic shoes. Mombi attacks Glinda and the Nome King and sacrifices herself so that Amy, Nox, and Madison can use the Yellow Brick Road to escape.
——
Where is the Yellow Brick Road taking Amy, Nox, and Madison? And now that we know Dorothy is still alive, what will she do to get her revenge? Find out how it all ends by reading THE END OF OZ!

What did you think of the new Dorothy Must Die artwork? Tell us in the comments below!