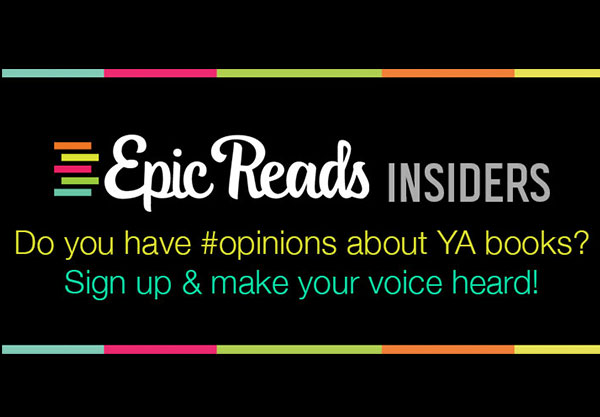 Do you live in the United States and want to be part of the not-so-super-secret book nerdiest VIP community ever? Of course you do. (We’re working on opening this up to the rest of the world very soon!) The good news is that we are signing up recruits to join Epic Reads Insiders! Epic Reads Insiders is a strong and mighty community of book nerds, librarians, book bloggers, bookstagrammers and book tubers who are passionate about books. If read YA and consider yourself a book lover then you are exactly the kind of reader we’re looking for to become an Epic Reads Insider!

What You’ll Do As An Epic Reads Insider

Who has the answers?! YOU have the answers! So far, the Epic Reads Insiders have given us so much important insight. Back in December, we were curious what readers like you were looking forward to this year. Here’s what we learned:

The Perks Of Being An Epic Reads Insider

As an Epic Reads Insider you’ll not only make your mark on the YA world, but you’ll also receive some FREE E-BOOKS. I mean come on… who doesn’t like free stuff?! We’re allowing our insiders to download some of the best YA straight to their E-readers after some of our surveys! Take a survey, and redeem your free e-books? Easiest decision you’ve ever made.

Go ahead. Join Epic Reads Insiders. You know you want to.

Did you join Epic Reads Insiders? Tell us in the comments below
Save