Ignite Me (Shatter Me #3) Recap: What You Need to Know 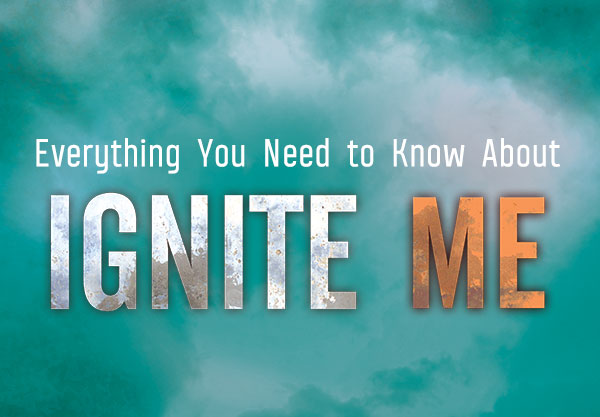 The Summer of Shatter Me continues! As you all know by now, we’ve been doing a Shatter Me series binge-read and recapping each book as we go along (here are some quick links to the recaps for Shatter Me and Unravel Me!) and we have an update—we just finished reading the third book and you know what that means…it’s time for the Ignite Me recap!
So like last time, we’ve gone ahead and put together the key moments that happened in Ignite Me while everything is still fresh in our heads. For those of you who have been reading along, let us know if we missed anything, and if you’re just looking for a refresher, scroll down to get the full breakdown of the third book of the Shatter Me series!

Ignite Me Recap: Everything You Need To Know

Juliette is back in Sector 45, where she has BAD memories of Warner. He assures her he’s brought her back only because he had to find a way to hide her. Then he breaks it to her: The battle is over, and all her friends are dead.

Juliette obviously freaks out…but then pulls herself together and insists that there could be survivors. Warner is pumped. He gives a sexy smile and says he’s thrilled that she’s finally ready to fight. Juliette then announces she’s going to kill his dad—and he smiles and asks if she’d like his help.

We breathe a major sigh of relief.

Juliette wants proof that Omega Point is gone, so she and Warner sneak out of Sector 45 to check it out. Omega Point is nothing but a huge hole in the ground. But then Kenji shows up! He takes Juliette to Adam’s old apartment — where there are a few survivors. Phew!

Juliette convinces everyone (except Adam) to join forces. Together, they can convince both the civilians and the soldiers to stand together. Once the Commander is dead, she’ll become the new SC. The last part of the plan has a few people doing double takes, but they swear to follow her into battle.

Warner divulges what a monster his dad really is. Then he confesses his love for Juliette. He asks her to deny that she loves him back, and she CAN’T ANSWER.

Juliette learns to control her power.

Juliette is training all the time. She, Kenji, and Warner sneak off base and learn that Warner’s mom has died. They share a moment. Back at Sector 45, she runs into Adam and encourages him to let Warner know they’re brothers. Adam responds by being kind of a dick, but his response makes Juliette realize that she’s learned how to control her power. She can now touch people without harming them.

Juliette confesses her love to Warner.

With Kenji’s blessing, Juliette heads up to Warner’s office and confesses THAT SHE LOVES HIM. Exactly how he is. He pins her to the wall, and thing escalate…quickly (chapter 55).

Warner finds out he has family.

Juliette finally tells Warner (in front of Adam) that they’re bros. After digesting the news for a few minutes, Warner says he’s actually kind of into the idea of having more family.

Juliette and Warner lure Anderson back to Sector 45. He’s on a boat nearby, and Juliette sneaks on board (with Kenji’s help). There’s a rough battle, but she manages to take down Anderson and rescue Sara and Sonya.

And they live happily ever after…

Warner and Juliette look out over Sector 45. He warns her that the whole world will be coming for them. She says she can’t wait to see them try.

We totally thought that was the end of the series but luckily, our queen Tahereh Mafi has decided to bless us with three more books in the series. The first of those three books, Restore Me, is already available so you know what that means…

That’s it for our Ignite Me recap and breakdown of everything you need to know about the third book in the series! Do you have anything else to add? Tell us in the comments below and we’ll add it in!
Up Next: