It's Pop Culture, Sherlock! Our Favorite Rewrites of Sherlock Holmes Why does everyone love Sherlock Holmes? Well it’s elementary, my dear reader. He is the master of deduction with skills so spectacular as to be superhuman. But Sherlock Holmes stories would not be complete without Dr. John Watson. Whether the duo are best friends, work associates, or if their relationship screams bromance, we love getting a glimpse of Holmes through the eyes of his closest companion.
Here are our favorite pop culture rewrites of the famous crime fighting duo.

Sherlock Holmes in the 22nd Century

About: In this cartoon from the early 2000s, it’s the 22nd century and Sherlock Holmes has been brought back to life to stop Moriarty’s clone.
Time period: imagined future of the 22nd century
Location: future London
Take on the original: Sherlock Holmes has been preserved in a glass-walled, honey-filled coffin until the 22nd century, when he is brought back to life to solve mysteries once again. Watson is a robot that has read all of the original Dr. Watson’s journals and assumes his persona to assist Holmes. Professor Moriarty died long ago, but someone has cloned his DNA to bring him into the 22nd century.
Holmes/Watson relationship: Holmes and robot-Watson are good teammates, but their relationship is not nearly as interesting as the friendship/budding romance between Holmes and Beth Lestrade of New Scottland Yard (a distant relative of the Inspector Lestrade of Sherlock’s time).

About: In this CBS television series, Sherlock Holmes has left London for Manhattan after spending time in rehab. His father has assigned him a sober companion, Dr. Joan Watson, to make sure he recovers. Sherlock, on the other hand, insists he needs no such companion and will recover on his own by focusing on his work as a consultant for the NYPD.
Time period: present day
Location: New York
Take on the original: Sherlock is a recovering addict who just finished rehab and is quite possibly the worst sort of human to have as a roommate. Dr. John Watson is now Dr. Joan Watson – a woman who used to be a surgeon but gave it up when she lost one of her patients. She now works to help addicts like Sherlock stay clean.
Holmes/Watson relationship: When it comes to solving cases, Sherlock is the one with the sharper mind, but Watson possesses her own skills and knowledge that place her on almost equal footing with Holmes. The two are roommates, work partners, and, as the show progresses, they even become good friends. The writers insist that the relationship between the two will not become a romantic one, but only time will tell.

About: In the first film, Sherlock Holmes and Dr. John Watson, along with the help of Sherlock’s former adversary, Irene Adler, investigate a series of murders connected to occult rituals and the mysterious Lord Blackwood, who is somehow still alive after Watson pronounced him dead. In the second film, Sherlock and Dr. Watson join forces once again, this time in a chase across Europe to foil the plot of Professor James Moriarty.
Time period: Victorian era
Location: London
Take on the original: Sherlock’s brilliant intellect makes him an excellent fighter. During fight scenes we see Sherlock mentally go through his actions step-by-step before the action is sped up and we see the results. Dr. Watson has a bit of a gambling problem.
Holmes/Watson relationship: It would seem that Sherlock has rather bromantic feelings for Watson, while Watson is more often than not annoyed with Holmes and his lack of “normal” human behavior. However, the two are still good friends and as much as Watson might get annoyed with Holmes, he still cares about him. About: In the BBC’s television miniseries about the great detective, Dr. Watson is a war veteran just home from Afghanistan who meets the eccentric Sherlock Holmes when Sherlock advertises for a flatmate. Watson moves into the Baker Street flat and pretty soon the two of them are solving crimes together.
Time period: present day
Location: London
Take on the original: Two words: Benedict Cumberbatch. Sherlock Holmes is still brilliant, but aloof, a bit detached, and almost entirely lacking in social graces. This being the 21st century, both the crimes and the detective work reflect the technological advancements of the time period. For example, Dr. John Watson blogs about their adventures. Cinematically we see Sherlock’s deductions as clouds of text on screen, occasionally accompanied by Sherlock’s narration.
Holmes/Watson relationship: The two are the best of friends. They get annoyed with each other. They get drunk and play heads-up with each other. And when it comes down to it, they have each other’s back. And who wouldn’t be friends with Benedict Cumberbatch? This is a bit of a bromance, for sure.
**fun fact – the first episode of season one, A Study in Pink, is loosely based upon the first Sherlock Holmes novel, A Study in Scarlet.

Sherlock Holmes in A Study in Scarlet 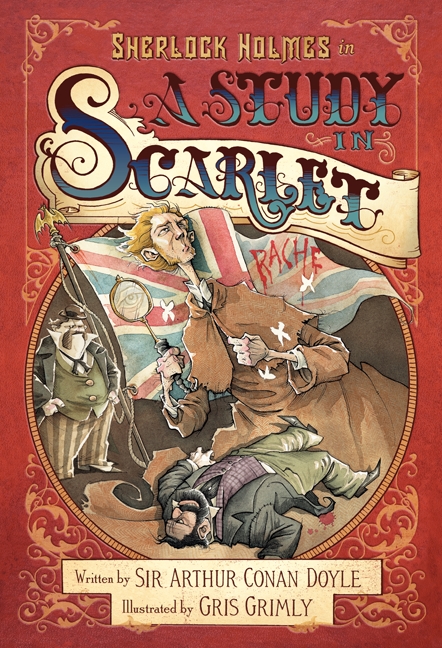 About: Sherlock Holmes in A Study in Scarlet is the original Sherlock Holmes story. It is the first novel Sir Arthur Conan Doyle ever wrote about the now world-famous detective, and it is also the first time Sherlock Holmes and Dr. Watson meet. In fact, “A Study in Pink,” the first episode of the BBC’s Sherlock, is based on A Study in Scarlet. This novel includes the original text of that story fully illustrated with artwork by Gris Grimly.
Time period: 1881
Location: London
Take on the original: It is the original – with illustrations by the modern master of gothic romanticism, Gris Grimly.
Holmes/Watson relationship:  This is the first time the famous duo meet each other, and consequently their first case together.  It is clear from Watson’s narration that he is impressed by Holmes, and Holmes seems to welcome the doctor’s company, but what will their relationship grow into?
Intrigued? Get a copy from your favorite retailer here!

The Great Mouse Detective: that hat though.

House: there are multiple references throughout the series to how House’s character was inspired by Sherlock Holmes!

Which is your favorite Sherlock Holmes retelling? Tell us in the comments below!