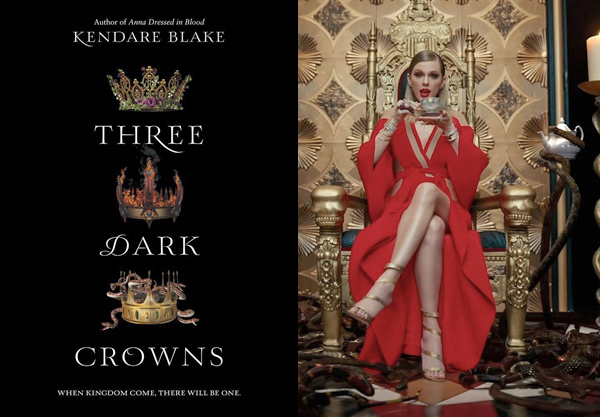 Love her or hate her, Taylor Swift shook our worlds this week when she teased and dropped “Look What You Made Me Do,” the lead single from her new album. And it took some getting used to, but we are officially on board with dark Tay. Listening to the lyrics and watching the video though, it all felt a bit… familiar.
Almost like the pop star had gotten some inspiration from our bookshelves and decided to embody our darkest THREE DARK CROWNS queen, Katharine.
So pull up a seat, and like leopard-dressed, gold-plated New Taylor™ would say, check out these receipts. Because we are 100% sure that this new song is about what’s coming for Katharine, and the rest of Fennbirn Island, when ONE DARK THRONE hits shelves.

“Look What You Made Me Do” – Kat, probably

In case you haven’t seen it yet, here’s the video and song that we will be referring back to throughout our super legitimate investigation:

We’ll try to keep this explicit detail-free for the THREE DARK CROWNS newbies tuning in, but be warned that this investigation is dark and full of spoilers.
When we last saw our queen, Katharine had suffered true betrayal and was thrown to the heart of the island, pushed down in the Breccia Domain. A couple chapters later though, she showed up at the poisoner compound, Greavesdrake Manor. She was dirty and cold, mangled and close to death. Frankly, it seemed pretty terrifying. But it wasn’t her appearance that’s haunted us since—it’s what she said to Natalia when she found her.

“I want revenge,” she whispers, and her fingers trail bloody streaks down Natalia’s arms.
“And then I want my crown.”

So now that that’s been established, let’s get into just why we think this song is all about our vengeful poisoner queen.

It started with the promo…

Last week, Taylor started dropping hints on her social media that something was coming. For three days in a row, she posted clips of a snake, just several seconds long, that built up to one long hissing, glitching, slithering predator. Now, Katharine might not be a true poisoner, but what’s the one icon from her supposed heritage that’s stuck by her?

Katharine touches the glass, and the snake lifts her rounded head. Katharine was instructed to never give her a name, told over and over that she was not a pet. But in Katharine’s head, she calls the snake “Sweetheart.”

The lyrics teased it…

We could get into the nitty gritty here, but do we even need to point out how perfectly they tie together with the end of THREE DARK CROWNS? “I rose up from the dead, I do it all the time” is giving us legit chills. Katharine has clawed her way free after she’s been written off as dead and is ready to get revenge on everyone who’s wronged her. She’s a changed queen, and it seems like T & K have that in common.
And while it may seem obvious from some lines that Tay is channeling the poisoner queen, that “Look What You Made Me Do” could have been ghostwritten by Katharine of Fennbirn Island, our theories weren’t really confirmed until the music video dropped.

And finally, the video proved it.

Let’s take a walk through  “Look What You Made Me Do,” shall we?

1. Katharine… isn’t as dead as everyone thinks

(Credit: @Sunsetbabe)
The islanders wrote Katharine off after she disappeared the night of the Quickening. She ran away, they said. The bear got her, they whispered. But none of this is true. Sure, she suffered a shocking betrayal, and even those closest to her assumed she wasn’t coming back (in fact, Pietyr probably bet on it), but Katharine was not deterred that easily.
“I don’t like your little games,” Taylor coos in the opening lines, and we’re sure Katharine can relate, always more innocent than those twisting the island’s battle around her.

2. And even as the young queen, she was never in control

(Credit: @Taylorswiftgif)
Katharine and her sisters are supposed to be the ones fighting in THREE DARK CROWNS, but it’s made obvious fairly quickly that it’s actually those around them truly vying for the power. Whether it’s the Arrons, the temple, or… well… Arsinoe’s friends trying to keep her alive, none of the queens take a particularly active role in their own fight.
So when Taylor, in the middle of lines about those around her lying, claims that “You said the gun was mine,” we know what she’s referring to. Katharine never pulled the trigger, but was merely the face of the fight that the poisoners waged. And as far as she’s concerned, her sisters pulled off the “perfect crime”—another one straight out of the lyric book! Took her out without ever having to get their hands dirty. But JOKE’S ON THEM.
“Look What You Made Me Do” is right. Katharine is def coming back to take control.

3. Okay wait also WE NEED TO MENTION THE THRONE

(Credit: @Cheryls-bombshell)
SHE IS LITERALLY SITTING COMFORTABLY ON A THRONE CRAWLING WITH SNAKES. Taylor could BE the cover of ONE DARK THRONE at this point. That’s it that’s all.
But not really, because even the LYRICS for this part are so on point. We go from the aforementioned “I rose up from the dead, I do it all the time,” to “I’ve got a list of names and yours is in red, underlined,” ALL WHILE A SNAKE POURS TEA. Katharine is back, she is getting her revenge, and she will be crossing off everyone who crossed her.

4. The Arrons only saw Katharine as a tool

(Credit: @Cametotheshowinsd)
Okay, maybe not so much Natalia, and we’re not sure where Pietyr’s head is at, but Katharine was always just another means to an end. She was their ticket to stay in power. With her gone, they’re ready to move on to the next plan, to scheme their way into staying in control even without a queen at their helm.
“The kingdom keys,” like Tay says, once belonged to her. But the Arrons were ready to lock her out when she needed them most. And “throw a feast?” The Gave Noir, anyone?

5. “The world moves on, another day, another drama”

(Credit: @Taylorswiftgif)
But not for Katharine, who, now, only thinks of karma. Honestly, after that ending with Arsinoe, we’re not sure what Katharine’s true powers are.
She could be a naturalist, bringing our attention to the tiger hoodie and cat masks that Taylor’s gang wears in the video—but Taylor rips her mask off, bent on destruction.
Like Katharine going into ONE DARK THRONE, it doesn’t matter what the others see her as. Because beneath her mask, regardless of what it is, she’s ready to wreak havoc.

6. A little bit of attitude is needed

(Credit: @Femmetay)
In THREE DARK CROWNS, Katharine gets walked all over. The Arrons tell her where to be and what to do. Her sisters lead the efforts in the battle for the crown. Even Pietyr, who’s the only one to show our girl a bit of agency, eventually goes the way of the others.
Enter ONE DARK THRONE Katharine. She’s coming in, powerful and knowing it. She’s ready to whip her camp into shape and create the followers she needs to win. We can’t wait to see how Genevieve reacts to this brand new attitude. After all, isn’t it what she wanted?

7. No one knows what the betrayed will do next

(Credit: @Mjwatson)
There’s not really much that Katharine has left to lose. She’s been made a fool of by her sisters, left for dead by her love, and her family has been scattered.
But there’s something different about her when she returns to Greavesdrake, and we have no idea what ONE DARK THRONE holds in store. Something tells us the old Katharine, the one that we came to know and love, didn’t make it out of that pit alive.
As Taylor would say—she’s dead.

(Credit: @Cametotheshowinsd)
Vengeance will not be a chore for Katharine in ONE DARK THRONE.
She does have a dark streak—that, we’ve seen—and we think that will take the forefront when she wages a real assault on her sisters. Her playful energy will have a sinister twist to it. It’s terrifying, but we can’t help being excited.
With Katharine, we have no idea what will happen next.

We could just be way too freaking excited about ONE DARK THRONE and seeing it in everything around us because we’ve been waiting for so long.

(Credit: @Taylorswiftgif)
Can you blame us?!

Are we 3DC crazy here, or could this song totally apply to Queen Katharine? Let us know what songs you associate with the girls of THREE DARK CROWNS below!
Up next: