This Muslim Author Is Tired Of Your Islamaphobic Bullsh*t

That Thing We Call a Heart by Sheba Karim is a story about things we can all relate to – best friend drama, being crushed by our crushes, and feeling pressure to conform. It’s also a story about Muslim American teens, and some of the specific challenges they face today. Below, Sheba explains what inspired her to write this book, and what she hopes to share with this story.
This blog post is part of our on-going Real Talk blog series where we ask authors to get real about some of the most controversial and important topics of today.

Why I Wrote That Thing We Call A Heart

By Sheba Karim
I was born in a small, sleepy town in upstate NY, to parents who were Muslim immigrants from Pakistan.   As one of the few Asians in my school, I tried to blend in, pretty impossible when most of your life is so different from the norm. Growing up, I couldn’t find myself in any books I read; in the realm of books, TV and Hollywood films, South Asian-Americans simply didn’t exist.  This childhood longing to see myself reflected even once in books or pop culture is what motivates me to write books with South Asian and Muslim characters today.  My first novel, Skunk Girl, set when I was growing up, was one of the first YA books to have a Pakistani/Muslim American protagonist.
My upcoming YA novel, That Thing We Call a Heart, also features Pakistani and Muslim American characters, but it’s set in contemporary times.  Since 9/11, Muslims have been collectively blamed for the actions of a few.  I had to deal with ignorance growing up, but not the kind of hate, fear and distrust Muslim American teens contend with today. Growing up watching Muslims depicted primarily as terrorists with beards and guns forces you to be on the defensive from a young age, defending not only your religion but your very humanity, as in this 2015 Buzzfeed video where young Muslim Americans say things like “I’m Muslim, but I’m not a terrorist,” “I’m Muslim, and I’m a feminist,” “I’m Muslim but I don’t hate America.”  It’s exhausting, and humiliating.  No group of people should have to look at a camera and defend their human worth, but that’s what young Muslim Americans find themselves doing, again and again.
I wrote That Thing We Call a Heart with a lot of hopes in mind.  One hope is that the characters in That Thing We Call a Heart will speak to Muslim American readers. Another is that the book will help non-Muslim readers understand not only the unique challenges and complexities young Muslims face today, but also that many teenage struggles, finding your way, loss and heartbreak, dealing with parental expectations, may differ in form but are similar in substance.  I hope my book reminds readers that though we may look different, we hurt, and love, and bleed the same, and I sincerely hope you love reading it as much as I loved writing it.

About That Thing We Call a Heart 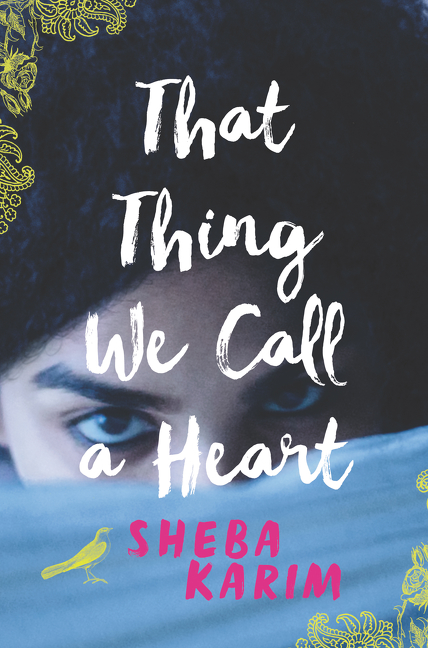 This young adult novel by Sheba Karim, author of Skunk Girl, is a funny and affecting coming-of-age story for fans of Jenny Han, Megan McCafferty, and Sara Farizan.
Shabnam Qureshi is facing a summer of loneliness and boredom until she meets Jamie, who scores her a job at his aunt’s pie shack. Shabnam quickly finds herself in love, while her former best friend, Farah, who Shabnam has begun to reconnect with, finds Jamie worrying.
In her quest to figure out who she really is and what she really wants, Shabnam looks for help in an unexpected place—her family, and her father’s beloved Urdu poetry.
That Thing We Call a Heart is a funny and fresh story about the importance of love—in all its forms.

Add That Thing We Call a Heart to your Goodreads shelf!

Up Next: This YA Author is Shutting Down Slut-Shaming Trolls Everywhere