It's Time To Change The Way We Talk About Queer Lives

Looking for Group is about two teens dealing with a lot of issues, being poor, being sick, being misunderstood by their families, and being queer – but NOT about coming out. Author Rory Harrison shares what inspired her to write Looking for Group, and her thoughts on how queer lives are so much more than any one facet of that experience, below.
This blog post is part of our on-going Real Talk blog series where we ask authors to get real about some of the most controversial and important topics of today.

Queer Kids Get A Life

by Rory Harrison
LOOKING FOR GROUP isn’t about coming out. At all, and that’s for a reason. Queer lives aren’t about coming out. It’s a facet of queer life, and this may come as a surprise to cis and straight people, it’s not a one time event. Queer people never stop coming out, in a million ways, a million times a day.
Instead, this book is about Dylan, who’s a poor, queer, sick kid with a lousy family. It’s about Arden, who’s a well-off, able-bodied queer kid with a broken family. Dylan and Arden are gamers; they’re rogues and healers. They’re anxious and depressed, and sometimes elated— they’re people.
Queer lives have angles and intersections: we’re not all upper-middle class white gay men living in cities. Growing up in gay in government housing in Indiana is radically different from growing up gay and middle class in New York City.
The language that the comfortably-off have the energy and the privilege to consider doesn’t always reach the poor queer kid in the middle of the country. The experiences don’t correspond, either. Holding hands in San Francisco is a given; doing it in Nebraska might be a radical, dangerous act.
I was that queer, poor kid in government housing, and that world can be binary. You’re gay or “normal.” That’s it. As I grew up, those were the words we had, and gay covered everything: all sexual orientations except straight, all genders except cisgender. So I was a 14 year old pan, non-binary girl who grew up calling herself gay.
There was no agonizing for me about coming out. I had gay uncles, and gay cousins, and nobody cared. I did grow up thinking there was something inherently bad about me because I was poor.
The police didn’t come in our neighborhood unless somebody was dead. I knew the street price for drugs and sex acts, and how to manipulate my way into a freebie or a treat. I had to stand at the back of the cafeteria line with the rest of the “free lunch” kids, to get whatever was leftover after the kids who could pay got their meals.
People don’t know about the marigolds and the tomato gardens in the back yards. Section 8, HUD, ghettoes, tenements— people say those places are bad neighborhoods. How could I not feel shame and despair over that?
The first time I recognized myself in a book, it was in S.E. Hinton’s THE OUTSIDERS. It was the first time I’d ever seen a neighborhood like mine in fiction. Where those kids were poor, and parents were divorced, and your friends were your family and that went deep down to the bone. That book changed me; it freed me.
So that’s why Dylan and Arden’s lives and their thoughts aren’t consumed with coming out. This book is the reverse of all the ones I read when I was a gay, poor kid in government housing. Instead of suffering toward coming out, forcible celibacy, and ultimately death (violence, AIDS, heartbreak, you name it) the kids are out and they get to live, to love, to go on adventures. They get to have lives instead of represent an issue.
They get to be what they are, and that’s human.

About Looking For Group 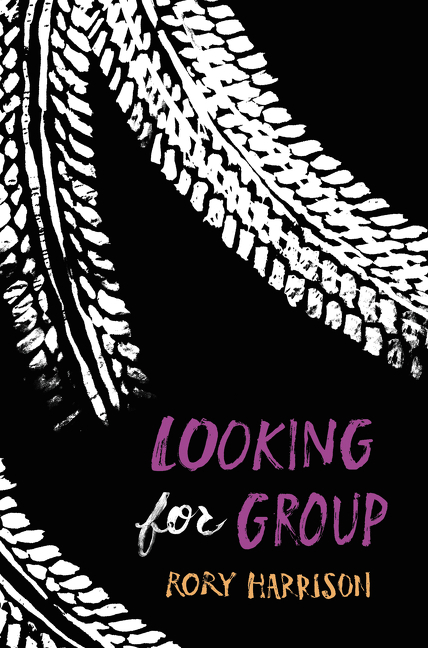 Dylan doesn’t have a lot of experience with comfort. His room in the falling-down Village Estates can generously be categorized as squalid, and he sure isn’t getting any love from his mother, who seemed to—no, definitely did—enjoy the perks that went along with being the parent of a “cancer kid.”
His only escape has been in the form of his favorite video game—World of Warcraft—and the one true friend who makes him feel understood, even if it is just online: Arden. And now that Dylan is suddenly in remission, he wants to take Arden on a real mission, one he never thought he’d live to set out on: a journey to a mysterious ship in the middle of the Salton Sea.
But Arden is fighting her own battles, ones that Dylan can’t always help her win. As they navigate their way west, they grapple with Arden’s father (who refuses to recognize his daughter’s true gender), Dylan’s addiction, and the messy, complicated romance fighting so hard to blossom through the cracks of their battle-hardened hearts.
Add Looking for Group to your Goodreads shelf!

Up Next: This Muslim Author Is Tired Of Your Islamophobic Bullsh*t