Culture, Tradition, and Identity: The Importance of ‘Black Enough’ from Editor Ibi Zoboi 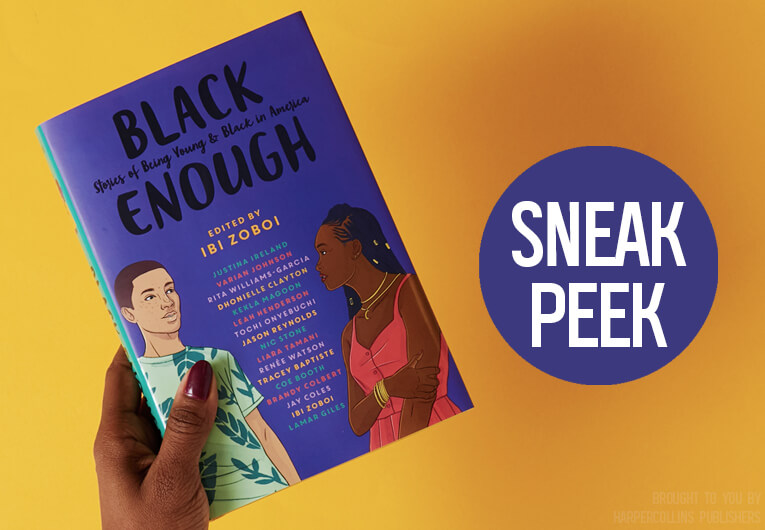 I was born in a country known for having had the first successful slave revolt in the world. Way back in 1804, Haiti became the very first independent Black nation in the Western Hemi-sphere. If global Blackness had a rating scale of one to ten, the Haitian Revolution has got to be at level ten, being the most Blackest thing that ever happened in history.

But none of that mattered when I first immigrated to the United States as a child. The Black and Latinx kids in my Brooklyn neighborhood didn’t know and didn’t care that my native country had once been a hub for freed slaves from America. According to them, I wasn’t Black enough. I wore ribbons in my hair and fancy dresses to school, and I had a weird accent and a funny name. Most important, I didn’t know how to jump double Dutch or separate a sunflower seed from its shell with just my front teeth, and I was off-key and off-beat when stomping, clapping, and singing to the latest cheers. These were all definitions of Brooklyn’s summertime Black girlhood. 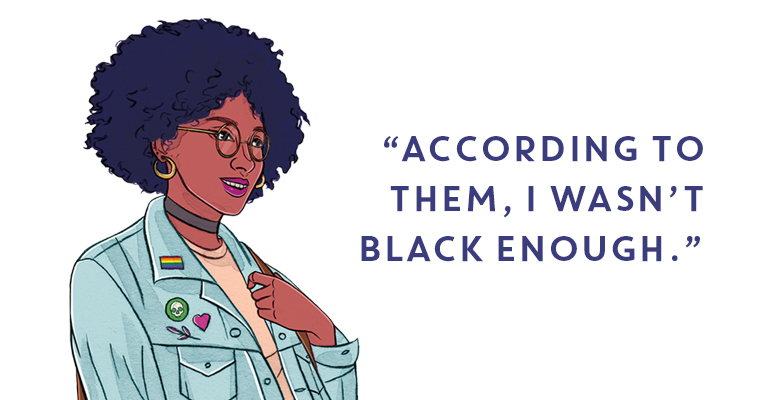 By the time I started high school, I had mastered all of those things and could easily blend into New York’s particular brand of teen Blackness, even while tucking away the quirky parts of myself—my love of sci-fi, disco music, and John Stamos.

In college, my small Black world expanded when I met my first roommate, who had the thickest Southern accent I had ever heard. My best friend in high school was African American and I’d been to her big family cookouts and even to visit her cousins in a small Black town in South Carolina. I’d been a little jealous that she had such a big family and at a moment’s notice could be surrounded by a plethora of aunts, uncles, and cousins. This was my first glimpse into African American culture—one with deep roots in the South. But that new roommate of mine with the Southern accent was from Rochester, New York, and her family had lived there for as long as she could remember.

Once I met new friends from Nigeria, Ghana, South Africa, and even England, my idea of Blackness began to expand. It was only then that I started to connect my own Brooklyn Blackness to a global idea of Blackness. After all, while the girls in my neighborhood teased me about not knowing how to spit out sunflower seeds, they didn’t know how to properly eat a mango, or know Creole or Patois or any of the Caribbean ring games. But before long, I knew there was a fine thread that connected all of these cultural traditions to each other.

Blackness is indeed a social construct. Within the context of American racial politics, there can be no Black without white. No racism without race. But the prevalence of culture is undeniable.

What are the cultural threads that connect Black people all over the world to Africa? How have we tried to maintain certain traditions as part of our identity? And as teenagers, do we even care? These are the questions I had in mind when inviting sixteen other Black authors to write about teens examining, rebelling against, embracing, or simply existing within their own idea of Blackness.

Renée Watson’s opening story, “Half a Moon,” places Black teen girls outdoors, among trees, and swimming in lakes—and yes, there is the common understanding that the hair situation is already handled. Jason Reynolds and Lamar Giles fully capture #blackboyjoy in their respective stories “The Ingredients” and “Black. Nerd. Problems.” There are no pervasive threats to their goofing around and being carefree. The intersectional lives of teens who are grappling with both racial and sexual identity are rendered with great care and empathy in Justina Ireland’s “Kissing Sarah Smart,” Kekla Magoon’s “Out of the Silence,” and Jay Cole’s “Wild Horses, Wild Hearts.” From Leah Henderson’s story of appropriation at a boarding school to Liara Tamani’s story of inappropriate nude pic games at a church beach retreat, the teens in Black Enough are living out their lives much like their white counterparts. They are whole, complete, and nuanced.

Like my revolutionary ancestors who wanted Haiti to be a safe space for Africans all over the globe, my hope is that Black Enough will encourage all Black teens to be their free, uninhibited selves without the constraints of being Black, too Black, or not Black enough. They will simply be enough just as they are.

THE (R)EVOLUTION OF NIGERIA JONES by Ibi Zoboi

I’ve been waiting for this night my whole life. Maybe even before I was born. My father, Dr. Kofi Sankofa Jones, tells his followers that we choose our lives while we’re in the spirit world. We choose the time and place to be born. We choose our family and parents. And therefore, we choose our race. So, according to him and everybody else in the Movement, I begged to be Black.

But I swear on all my African ancestors that I didn’t ask to be this Black.

I’m the only daughter of a Black nationalist revolutionary freedom fighter. At least that’s what my father calls himself. This afternoon, there’ll be about three hundred of his followers gathered in the First African Presbyterian Church. He’s presenting his final lecture, called “There Is No Table,” before he serves time at a correctional facility.

I’m in the back of the church as the Young Warriors, the teen boys of the Movement, place pamphlets onto the pews. I’m holding a stack of those pamphlets in my hand that showcases my dope graphic design skills with the Movement’s logo—an M in the middle of a black silhouette of Africa—but no one ever notices that. They read about the Movement’s history and my father’s bio. Dr. Kofi Sankofa Jones is the great-grandson of Garveyites and his father was a Black Panther. He had me write that up. He never mentions my grandmother—a strict Baptist who’s been trying to get me out of the Movement since the day my mother died four years ago.

We’re not Christian, but the Movement rented this church for the lecture. My father says that as liberated Black people, we’re not supposed to believe in a white Jesus, a white god, or any white savior. Still, it’s the only place that would host us because they believe half the stuff my father says.

I’m wearing a pair of Chuck Taylors along with my usual ankle-length denim skirt deconstructed from an old pair of jeans from a thrift store. My feet hurt from standing all day. This morning, I spent four hours in front of the Old Navy on Chestnut Street handing out flyers for this lecture to any Black person walking by. My best friend, Kamau, was with me, but he stood on the opposite corner. We get more recruits that way. I could hear him from across the street reciting his spiel with a big, bright smile. “Do you know who you are, brother? Do you know your history?” He made eye contact and stepped closer to the stranger. “Well, history is our story, and Dr. Kofi Sankofa Jones will tell it like it is!”

His hype is way more convincing than mine. Not one person took a flyer from me. A man who recognized me even blurted out, “Your daddy needs to pay his taxes, Nigeria Jones!”

I shift my weight from one foot to the other to ease some of the soreness just as someone touches my shoulder. It’s Kamau, and he’s wearing his signature Young Warriors custom-made red dashiki and black pants. “Geri, I put your bag under the blue minivan in the parking lot,” he whispers.

“Shredded at the thighs just like you wanted and blond ombré!”

“Ombré?” I whisper-yell, turning my whole body to him. “I didn’t ask for all of that, Kamau.”

“Fine. Then did you pack deodorant? And not the chemical- free stuff we usually wear, ’cause I’ll be sweating like a hog under that wig.”

“Even better. Antiperspirant. The kind that gives you cancer,” he says with his eyes moving about, making sure no one is watching us.

That joke stings, but I don’t tell him.

When Kamau is around the Young Warriors, his whole body changes from when he’s around me. He raises his chin, pokes out his chest, and tightens his fists like the rest of those boys. He’s supposed to be a warrior for his people—that’s why his parents named him Kamau, meaning “silent warrior” in Kikuyu. I’m the only one who knows that Kamau is a lover, not a fighter.

My father named me Nigeria because it’s the richest country in Africa. I guess his dream for me is to be like an oil-rich country on a third-world continent. But trying to jack poor people for all their paper is the last thing on my mind. Unlike my father.

“Thank you,” I say, looking around as well. It’s no big deal that we’re talking to each other. But it’s a big deal that Kamau is helping me plan my one-night escape.

“Awww! Nigeria and Kamau!” Mama Afua sings as she approaches us. She’s the eldest member, who, at sixty-two, knows how many times the Movement has tried and failed to be a sovereign people like the Amish, or the folks down in Texas, but Black and with more sense. “Geri, don’t you worry. You know we’ve got your back while your father’s away. And Kamau will take care of you. How long until the wedding? Y’all turn eighteen in a few months, right?”

Kamau puts his arm around my shoulders, pulls me in, and kisses my forehead. I wrap my arms around his thin torso.

We’re supposed to be boyfriend and girlfriend…