Read an Exclusive Excerpt of Everless 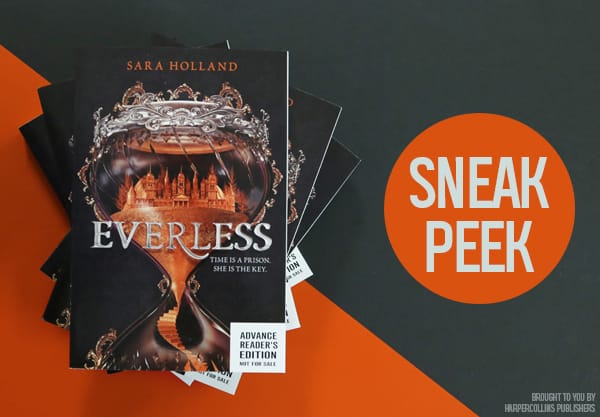 Enter the world of EVERLESS, your next fantasy obsession. Also, our current fantasy obsession. Basically soon to be everyone’s fantasy obsession.
EVERLESS is set in the land of Sempera, where time is literally money, bound to blood and extracted as coins. Years of life are traded away, and one girl, desperate to earn more time, finds herself at the center of a secret that will change the fate of time itself. It’s got the magical mythology of Caraval, the fast-paced royal action of Red Queen, and the dark, shocking twists of Three Dark Crowns. So our only question is… are you ready for it?
Scroll down and read the first three chapters of EVERLESS now!

I tarry with Amma for as long as I can, but the sun doesn’t stop sinking. My stomach heavy with dread, I trudge off to the time lender. I weave between stalls to find the end of the still-too-long line, winding toward Duade’s door with its burnt-in hourglass symbol. Behind it will be the flash of the blade, the powder that turns blood and time to iron.
I keep my eyes on the ground in an effort to avoid the sight of the people who leave the shop, pale and breathless and a little bit closer to death. I try to tell myself that some of them will never visit the time lender again—that next week, after they find work, they will go home and melt a blood-iron in their tea and drink it down. But that doesn’t happen here in Crofton; at least, I’ve never seen it. We only ever bleed, only ever sell.
After a few minutes, a commotion draws my eyes up. Three men are emerging from the store—two collectors, Everless men, the family crest gleaming on their chests and short swords swinging on their belts; and between them, the time lender, Duade, his arms pinned in their grip.
“Let me go,” Duade shouts. “I didn’t do nothing wrong.”
The crowd murmurs, and I feel panic cinch around us all. Certainly no small number of illegal happenings go on in Duade’s shop, but the Gerlings’ police have always let them pass with a wink and a nod and a month-iron slipped from palm to palm. The time lender might be an oily, greedy sort, but we all need him at one time or another.
I need him today.
As Duade struggles uselessly against the officers, the sound of hooves rings out through the square. Everyone quiets at once, Duade going still in the collectors’ grip as a young man on a white mare rounds the corner into the marketplace, hood drawn up against the cold.
Roan. In spite of myself, my heart lifts. Over the past few months, now that he is of age, Roan Gerling has started to pay visits to the villages his family holds. The first time he appeared, I scarcely recognized him, lean and blindingly handsome as he’s become—but now, whenever I go to market, I secretly hope to see him, though I know he can never see me. I want to hate him for his fine clothes, the way he looks around with that slight, benevolent smile, reminding us that he owns every tree and cottage and pebble in the road. But my memories of Roan run too deep for hatred, no matter how I try. And besides, the collectors are more lenient when he’s around. Whatever is happening with Duade, Roan will put an end to it.
But when I glance back at the storefront, the look on Duade’s face as he stands pinioned between the two guards isn’t relief. It’s pure fear.
Confused, I turn as the boy yanks down his hood. He has the right broad shoulders, golden skin, and dark hair. But he is all severity: stormy brows; hard nose; a high, aristocratic forehead.
The breath vanishes from my lungs.
Not Roan. Liam. Liam, Roan’s older brother, who I thought was safely off studying history at some ivied academy by the ocean. Liam, who for ten years has walked in my nightmares. I’ve dreamed so often about the night we fled, I can’t separate nightmare from memory, but Papa made sure that I retained one thing: Liam Gerling was not our friend.
Liam tried to kill Roan when we were children. The three of us were playing in the forge, and Liam pushed his brother into the fire. If I hadn’t pulled Roan out before the flames could catch, he would have been burned alive. And as my reward, we had to flee the only home I had ever known, because Papa was afraid of what Liam would do to me if we stayed at Everless, knowing what I had seen.
Later, when I was twelve, Liam found Papa and me in our cottage outside of Rodshire. Their scuffle woke me in the middle of the night, and when I left my bedroom, my father grabbed my hand—he’d chased Liam off—and we fled a second time.
I’m paralyzed, seized by the sense that my worst fears have come to life—after all these years, he’s found me, found my father, again.
I know I should turn away, but I can’t tear my eyes from him, can’t stop picturing that face as it was ten years ago, staring at me in hatred through a wall of smoke, on the day we fled Everless for good.
I hear Papa’s voice in my ears: If you ever see Liam Gerling, run.

Well, what did you think of EVERLESS? Are you as excited as we are to enter the wicked world of Sempera? Tell us in the comments below!