10 Books to Fill That Stranger Things Hole in Your Life 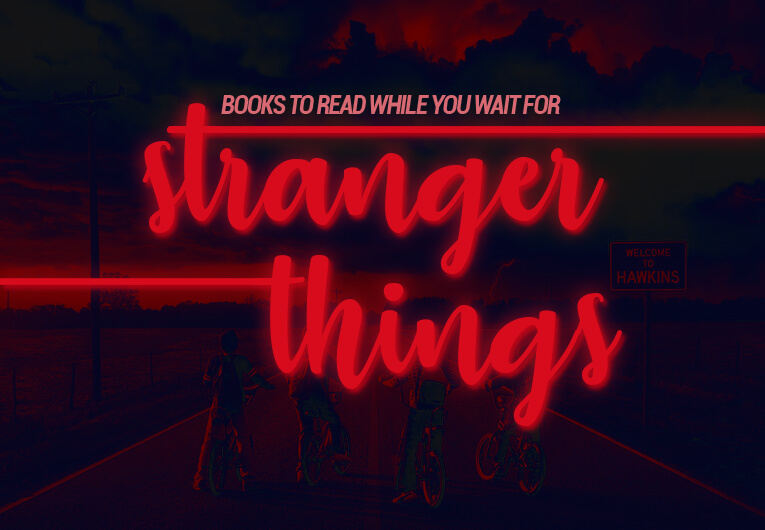 If mornings are for coffee and contemplation, then fall is definitely for creepy books and Stranger Things. And, seriously, what are we supposed to do without our annual visit to Hawkins, Indiana?

Because somebody (👀 looking at you, Duffer Brothers) decided we have to wait until next year to get our fix of El, Hopper, and everyone’s favorite teen mom, Steve Harrington, we decided we might as well put together a little list of books that will help fill the void they’ve left behind. These books are all dark with a dose of camp, empowering with a dose of horror. We can bet they’ll all give you chills—but in the fun way, that makes you love them all the more for it.

And isn’t that what fall reading is all about?

TO HELP YOU WAIT FOR SEASON THREE

Ever since this book came out in early October, it’s been giving us some MAJOR Hawkins vibes. A small town terrorized by an evil being? Three girls taking on the supernatural force that has literally been devouring girls in their hometown for decades? Sounds like it’s right up Mike and Eleven’s alley. Actually, could this book just be the Max and Eleven team-up we’re dying for?

Who are the Sawkill Girls?

Marion: The newbie. Awkward and plain, steady and dependable. Weighed down by tragedy and hungry for love she’s sure she’ll never find.

Zoey: The pariah. Luckless and lonely, hurting but hiding it. Aching with grief and dreaming of vanished girls. Maybe she’s broken—or maybe everyone else is.

Val: The queen bee. Gorgeous and privileged, ruthless and regal. Words like silk and eyes like knives; a heart made of secrets and a mouth full of lies.

Their stories come together on the island of Sawkill Rock, where gleaming horses graze in rolling pastures and cold waves crash against black cliffs. Where kids whisper the legend of an insidious monster at parties and around campfires. Where girls have been disappearing for decades, stolen away by a ravenous evil no one has dared to fight…until now.

2. The Hazel Wood by Melissa Albert

A history of bad luck? A family member stolen away by a creepy, supernatural-esque figure? If this doesn’t scream Will Byers, we don’t know what would.

Seventeen-year-old Alice and her mother have spent most of Alice’s life on the road, always a step ahead of the uncanny bad luck biting at their heels. But when Alice’s grandmother, the reclusive author of a cult-classic book of pitch-dark fairy tales, dies alone on her estate, the Hazel Wood, Alice learns how bad her luck can really get: her mother is stolen away―by a figure who claims to come from the Hinterland, the cruel supernatural world where her grandmother’s stories are set. Alice’s only lead is the message her mother left behind: “Stay away from the Hazel Wood.”

Alice has long steered clear of her grandmother’s cultish fans. But now she has no choice but to ally with classmate Ellery Finch, a Hinterland superfan who may have his own reasons for wanting to help her. To retrieve her mother, Alice must venture first to the Hazel Wood, then into the world where her grandmother’s tales began―and where she might find out how her own story went so wrong.

Making a deal with the devil has never been so entertaining. We’re OBSESSED with the mystery of the Devil’s Forest, and think it’s a perfect complement to the Upside Down.

Long ago, a village made a bargain with the devil: to ensure their prosperity, when the Slaughter Moon rises, the village must sacrifice a young man into the depths of the Devil’s Forest.

Only this year, the Slaughter Moon has risen early.

Bound by duty, secrets, and the love they share for one another, Mairwen, a spirited witch; Rhun, the expected saint; and Arthur, a restless outcast, will each have a role to play as the devil demands a body to fill the bargain. But the devil these friends find is not the one they expect, and the lies they uncover will turn their town—and their hearts—inside out.

We swear, Abby and Gretchen channel Mike and Will in their powerful bond that spans time, circumstance, and… demonic possession. Add in the the 1980s setting, and we’re totally sold.

Abby and Gretchen have been best friends since fifth grade, when they bonded over a shared love of E.T., roller-skating parties, and scratch-and-sniff stickers. But when they arrive at high school, things change. Gretchen begins to act…different. And as the strange coincidences and bizarre behavior start to pile up, Abby realizes there’s only one possible explanation: Gretchen, her favorite person in the world, has a demon living inside her. And Abby is not about to let anyone or anything come between her and her best friend. With help from some unlikely allies, Abby embarks on a quest to save Gretchen. But is their friendship powerful enough to beat the devil?

What would YOU do if you knew something had happened to your best friend, but NOBODY believed you? Welcome to Claudia—and Mike, Lucas, and Dustin’s—world.

Monday Charles is missing, and only Claudia seems to notice. Claudia and Monday have always been inseparable—more sisters than friends. So when Monday doesn’t turn up for the first day of school, Claudia’s worried. When she doesn’t show for the second day, or second week, Claudia knows that something is wrong. Monday wouldn’t just leave her to endure tests and bullies alone. Not after last year’s rumors and not with her grades on the line. Now Claudia needs her best—and only—friend more than ever. But Monday’s mother refuses to give Claudia a straight answer, and Monday’s sister April is even less help.

As Claudia digs deeper into her friend’s disappearance, she discovers that no one seems to remember the last time they saw Monday. How can a teenage girl just vanish without anyone noticing that she’s gone?

Just like the kids in Stranger Things have to fight monsters and Demogorgons in the Upside Down, Alice faces off with the Nightmares in Wonderland. Get your fix with this epic Alice in Wonderland retelling.

The first time the Nightmares came, it nearly cost Alice her life. Now she’s trained to battle monstrous creatures in the dark dream realm known as Wonderland with magic weapons and hardcore fighting skills. Yet even warriors have a curfew.

Life in real-world Atlanta isn’t always so simple, as Alice juggles an overprotective mom, a high-maintenance best friend, and a slipping GPA. Keeping the Nightmares at bay is turning into a full-time job. But when Alice’s handsome and mysterious mentor is poisoned, she has to find the antidote by venturing deeper into Wonderland than she’s ever gone before. And she’ll need to use everything she’s learned in both worlds to keep from losing her head . . . literally.

7. This Savage Song by Victoria Schwab

“Monsters, monsters, big and small, they’re gonna come and eat you all…” A city overrun with monsters + a couple of teens running for their lives = the perfect combination for when you’re really missing the Indiana action.

Kate Harker and August Flynn are the heirs to a divided city—a city where the violence has begun to breed actual monsters.

All Kate wants is to be as ruthless as her father, who lets the monsters roam free and makes the humans pay for his protection. All August wants is to be human, as good-hearted as his own father, to play a bigger role in protecting the innocent—but he’s one of the monsters. One who can steal a soul with a simple strain of music.

When the chance arises to keep an eye on Kate, who’s just been kicked out of her sixth boarding school and returned home, August jumps at it. But Kate discovers August’s secret, and after a failed assassination attempt the pair must flee for their lives.

Learning to trust a mysterious stranger? Teaming up to save the day? Alex’s journey to Los Lagos to save her family gives us almost as many feels as the Hawkins gang does when they’re kicking ass in the Upside Down.

Nothing says Happy Birthday like summoning the spirits of your dead relatives.

Alex is a bruja, the most powerful witch in a generation…and she hates magic. At her Deathday celebration, Alex performs a spell to rid herself of her power. But it backfires. Her whole family vanishes into thin air, leaving her alone with Nova, a brujo boy she can’t trust. A boy whose intentions are as dark as the strange marks on his skin.

The only way to get her family back is to travel with Nova to Los Lagos, a land in-between, as dark as Limbo and as strange as Wonderland…

You can scroll down a fraction of a bit and see the cover for Monster—and understand completely why it makes us want to run as fast as Mews did from Dustin’s demo-dog. And just wait until you get to the second book, Villain…

It’s been four years since a meteor hit Perdido Beach and everyone disappeared. Everyone, except the kids trapped in the FAYZ—an invisible dome that was created by an alien virus. Inside the FAYZ, animals began to mutate and teens developed dangerous powers. The terrifying new world was plagued with hunger, lies, and fear of the unknown.

Now the dome is gone and meteors are hitting earth with an even deadlier virus. Humans will mutate into monsters and the whole world will be exposed. As some teens begin to morph into heroes, they will find that others have become dangerously out of control…and that the world is on the brink of a monstrous battle between good and evil.

10. House of Furies by Madeleine Roux

There’s a DARK twist in these books, and “Papa,” or, as we prefer to call him, the sick and twisted Dr. Brenner, reminds us of a certain character. Mysterious, more than a little creepy, and certainly up to no good. Combine that with the monstrous staff of Coldthistle House, and you’ve got a great read to keep the void at bay.

After escaping a harsh school where punishment was the lesson of the day, seventeen-year-old Louisa Ditton is thrilled to find employment as a maid at a boarding house.

But soon after her arrival at Coldthistle House, Louisa begins to realize that the house’s mysterious owner, Mr. Morningside, is providing much more than lodging for his guests. Far from a place of rest, the house is a place of judgment, and Mr. Morningside and his unusual staff are meant to execute their own justice on those who are past being saved.

Louisa begins to fear for a young man named Lee who is not like the other guests. He is charismatic and kind, and Louisa knows that it may be up to her to save him from an untimely judgment. But in this house of distortions and lies, how can Louisa be sure who to trust?