The great part about the Discworld series is that every single book is a standalone novel; they’re just all set in the same universe! You can read them in any order but if you still want some guidance, use this infographic to help figure out where to start.
We’ve organized all the books in a Disc and you can just see the Great A’Tuin swimming through space beneath them. (Come on? Who doesn’t want to read a series where the world is balanced on the backs of four elephants standing on the shell of a giant turtle?)
Each colored line represents a different character or theme in Discworld. Simply pick a color and follow it along the Disc to see all the books that fall into that theme. Solid circles represent full novels while circles with a black center are short stories or minor works, often with a minor connection to a full novel. For instance, “The World of Poo” (heeheehee) is a children’s work that appears in Snuff that Terry Pratchett then actually wrote.
Feast your eyes on the infographic below! To view it larger, just click on the image, or download the PDF from Scribd. 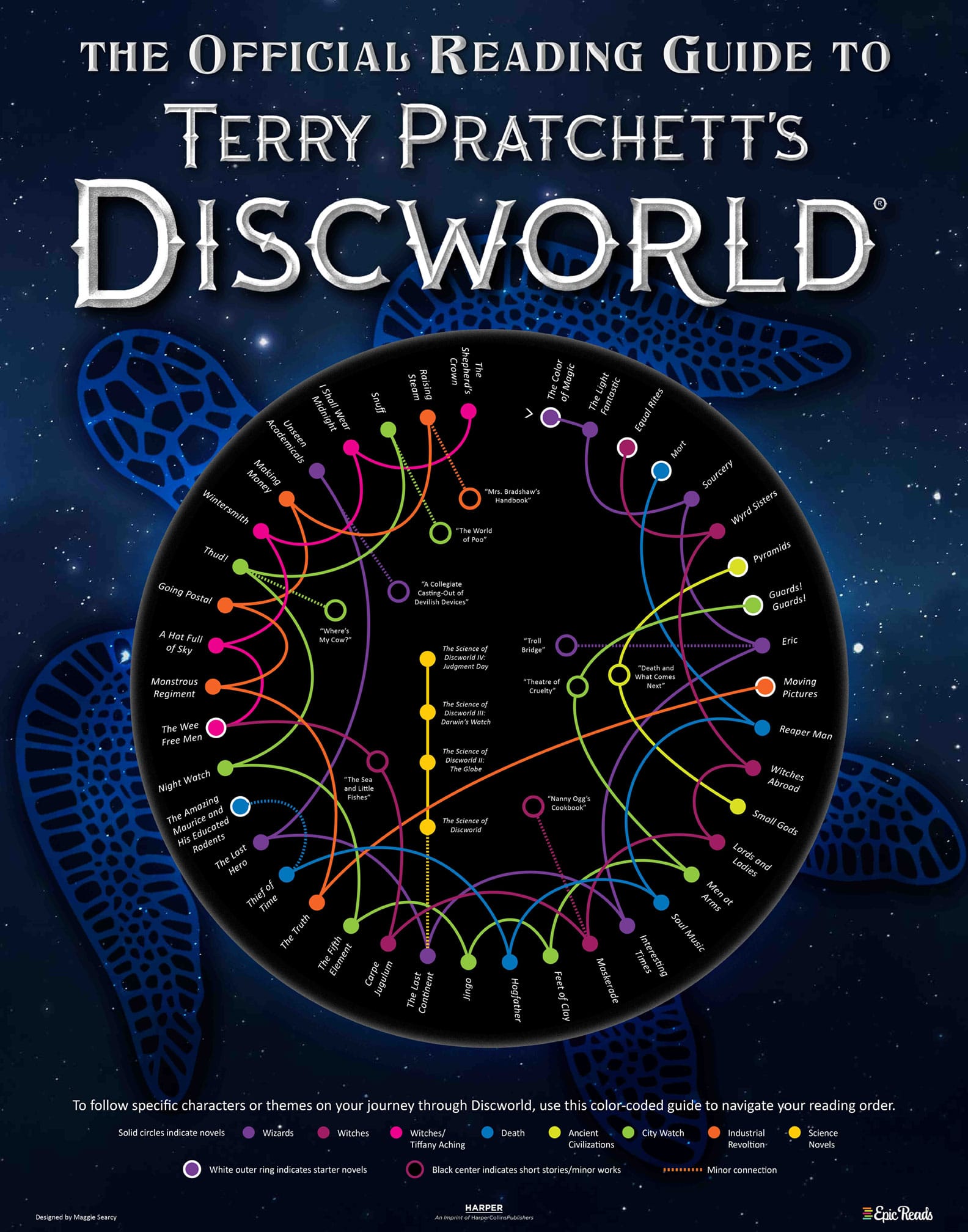 Purple: books about wizards. In particular, these books focus on a bumbling wizard named Rincewind. If wizards are your jam, start with the very first Discworld book, The Color of Magic.
Maroon: books about witches. Who doesn’t love witches? We suggest you start with Equal Rites (or see the next item!)
Pink: books still about witches, but with a particular focus on young witch, Tiffany Aching. We think The Wee Free Men is a great entry point for all of Discworld and this is the first book to feature Tiffany.
Blue: books about Death. Not just books where people die a lot – Death is an actual character and he speaks IN ALL CAPS. The first book focused on Death is Mort.
Lime: books about ancient civilizations on the Disc. Check out Pyramids to start here!
Green: books about the city watch. A small group of guards are some of Discworld fans’ favorite characters – start with Guards! Guards! Bonus: dragons!
Orange: books that bring the industrial revolution to Discworld. Semi-magic technologies are on the rise, starting with Moving Pictures.
Yellow: the science books. These are a series of science-focused books that meld fiction and fact – but you should probably hold off on these until you’ve decided you’re totally hooked on Discworld.

So what do you think? Are you reader enough to tackle all of Discworld? Where are you going to start?