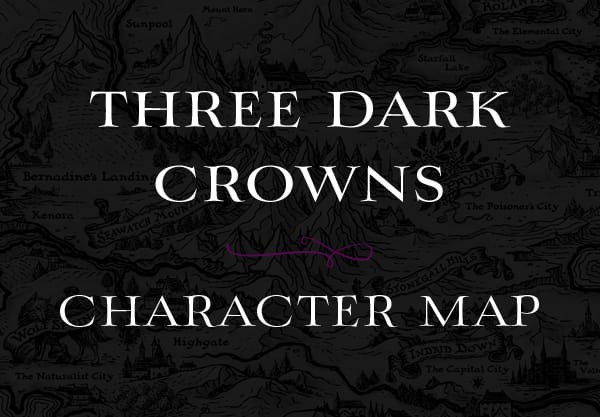 When the plot of a series centers around three triplet queens battling to the death to rule their kingdom, it kind of goes without saying that there might be a lot of high stakes showdowns involved. And Kendare Blake’s THREE DARK CROWNS has that covered.
We mean—have you read ONE DARK THRONE yet?! There’s a literal arena battle.
But one of our favorite things about the series is actually the supporting web of characters. But with all of the intrigue, plotting, and trickery taking place on Fennbirn Island, it can be hard to keep up with which queen each character supports, and how loyal their allegiance is. Heck, it can be hard just to remember their names. So, with the help of the gorgeous map from the books, we’ve created a handy infographic so you can keep track of each character’s bio and allegiance as you read! Think of it as an easy way to set the stage as you make your way through the series.
We’ve kept this one spoiler free, so just take note that Kendare is not playing around with the shocking twists. And while this map shows whose camp each character starts out in, there will be shocking reveals, secret conspiring, and so much more!

Our Super Handy Map of the Three Dark Crowns Characters! 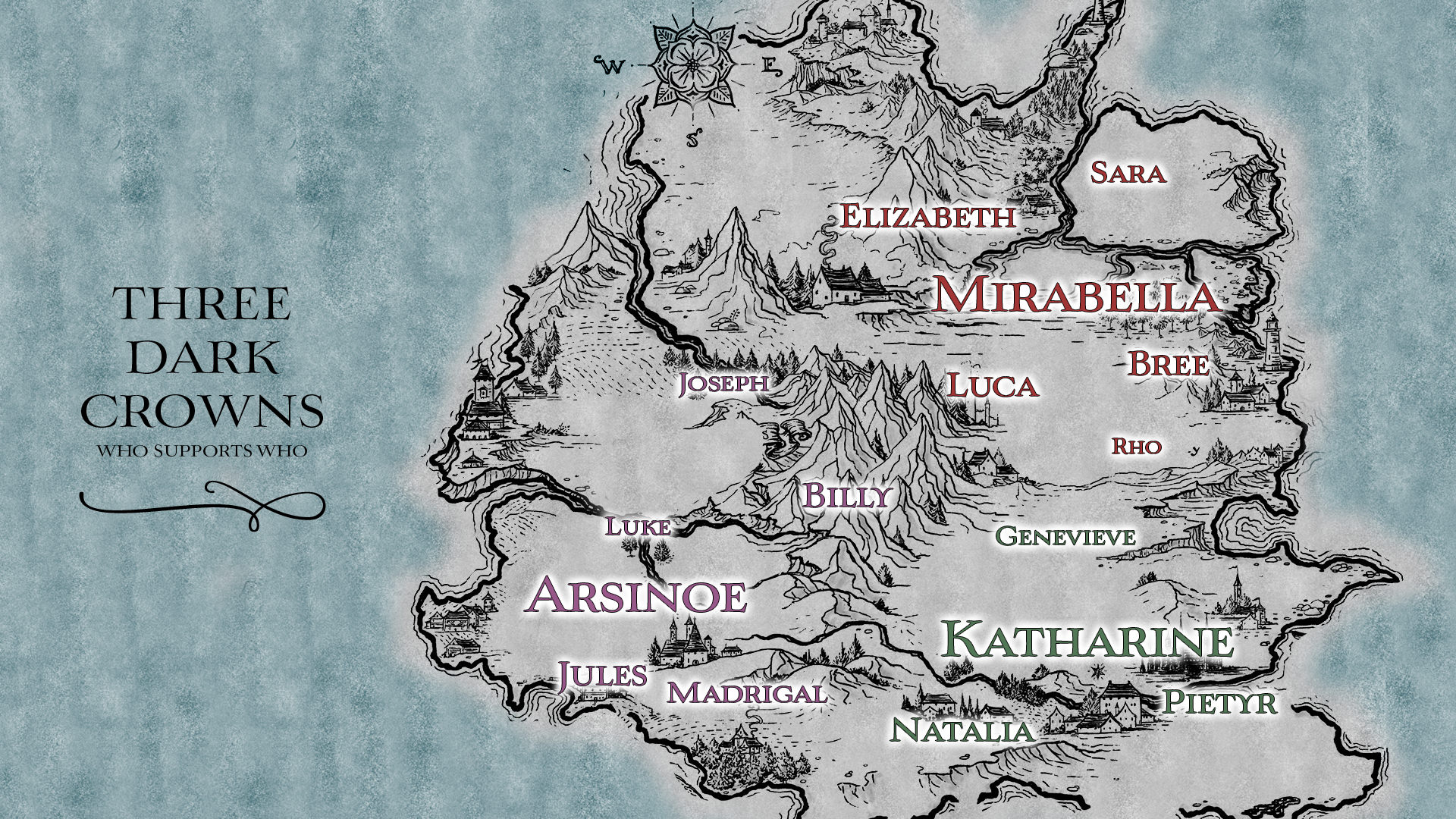 Click here—or the image itself!—to view it at full-size!
As you can see in the graphic, the characters are color-coded to go along with the queen they most closely support. Their size and proximity to the queen tell you just how loyal they are! And if you want to know a little more about them all, well, here you go 💀

The elemental queen, her power is controlling the elements. Mirabella is the strongest elemental queen Fennbirn has seen in years and is favored to win by many islanders. Being the favored queen has its perks, and Mirabella is also considered the most beautiful of the sisters. But is the people’s loyalty truly with Mirabella, or with the Temple that supports her?

Daughter of Sara Westwood, Bree is a member of the family who has raised Queen Mirabella since childhood. Also an elemental, her affinity is fire. Bree is flirty and fun, and so is the perfect complement to Queen Mirabella’s prim and proper ways. These two are quite the partners in crime. But her family is loyal to the Temple above all. If Bree had to make a choice, would she go against her fellow Westwoods in favor of her royal friend?

Elizabeth is a temple initiate and a bit of a rebel who’s learning the hard way that attempts to bend the rules don’t go over well. We mean, she’d literally sacrifice a limb to help her friend. Now that’s loyalty. But if Mirabella decided to go against the Temple, is Elizabeth strong enough to face the retribution in store?

High Priestess of the Temple. Luca is the head priestess in charge and calls the shots. She tries her best to keep an even temper and open mind, and to keep the more zealous priestesses in line. Luca has been a close friend, supporter and confidant of Queen Mirabella for years. But to keep her support, Mirabella will have to do as the Temple decrees.

Fellow Temple Priestess Rho takes rule-following to scary new levels. She’s not one to stand for defiance and isn’t afraid to pass harsh judgments (or to carry out the sentences herself). She may even take joy in it. She’s capable of devising some very brutal plots in order to ensure her favored queen reigns supreme. But if her ideals are at stake, will her loyalty shift?

Naturalist queen Arsinoe has a slight problem—her ability to control aspects of nature, like plants and animals, has yet to appear and time is running out. Her lack of abilities makes her an underdog in the battle for the crown. But what Arsinoe lacks in naturalist talent, she makes up for with sharp wit, a feisty spirit and a pack of fiercely loyal friends.

New kid on the island Billy has traveled from the mainland as a suitor to the queens. His dad has some questionable ties with powerful allies on the island. He’s also foster brother to Joseph Sandrin, who was raised by the Chatworth family when he was banished from the island. Billy is the ultimate charmer, but will his loyalty remain once he’s met the other queens? Or will his father have the ultimate say over which queen he supports?

Mother of Jules Milone and member of Queen Arsinoe’s foster family. Madrigal is a naturalist but has also been known to dabble in low magic with mixed results. To her, they’re often with the costs. She’s basically out for herself, but deep down, her love for her family motivates her to try to help Arsinoe in any way she can. The trouble is, her methods often end up being the opposite of helpful, and could result in life-threatening consequences.

Joseph has been friends with Arsinoe since childhood and was even banished from the Island for attempting to help her escape years ago. He’s also the long lost love of Jules Milone. But Joseph’s wandering eye (and maybe Arsinoe’s bad attempt at magic) threatens to screw everything up. He gets caught up in a fiery romance (see what we did there?) with Queen Mirabella. Will Joseph choose his new love over his old?

Thoughtful, kind, and bookish, Luke Gillespie is a booknerd’s dream date. He’s a naturalist who’s familiar is a rooster named Hank. Luke has a soft spot for underdog Queen Arsinoe, standing by her even when she’s got zero chances of winning. His loyalty is endearing, and while he may not be the fiercest of Arsinoe’s friends, he might be the most dependable.

Poisoner queen Katharine is definitely the dark horse in this competition. While she comes from a long line of reigning poisoner queens, she’s yet to develop abilities herself. Katharine does have a few things working in her favor though – connections to the powerful Black Council, and a strong sense of ambition. Together, these might just be enough to win her the throne. We aren’t counting her out just yet.

An established poisoner, Pietyr travels from his home to help prepare Katharine for her fight for the crown. His goal? To make her the favorite queen of all the suitors. It might work a little too well, though, and he starts to fall for her himself. Pietyr becomes her most trusted ally. But love is unpredictable, and Kat may find herself falling in more ways than one.

Matriarch of the Arron family and Head of the Black Council. Poisoner extraordinaire. You do not want to mess with Natalia Arron. What Katharine lacks in strength and ability, Natalia more than makes up for. She’s the closest thing to a mother that Katharine has, but more important, she’s grooming her charge to rule, and losing isn’t a part of her plans.

The younger sister of Natalia, and a poisoner with her own reputation. Genevieve is used to being part of the island’s most powerful family and she likes her place at the top. She’s not even considering the alternative. Katharine better step up. She’s determined to see Kat and the poisoners succeed. Maybe a little too determined…

Have you read ONE DARK THRONE yet? Because these bios are only the beginning. And if you haven’t, these are the perfect aide to read along with!
Who’s your favorite character? Let us know in the comments below!
Up next: 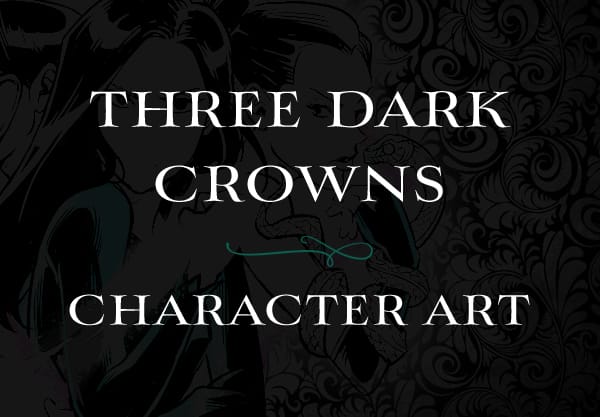