Who doesn’t enjoy a story of forbidden love? There is something irresistible about two characters who can’t resist falling for each other, even though everyone else in their lives tries to tear them apart.

Writing about the unlikely romance between Nazi Party golden girl Gretchen Müller and Jewish reporter Daniel Cohen in Prisoner of Night and Fog got me thinking about real-life star-crossed lovers. Here’s my top nine in chronological order:

When Layla’s father forced her to marry someone else, Majnun went mad with grief. Over the centuries, their story has inspired dozens of poems and Eric Clapton’s hit song, “Layla.”

This love affair between a beautiful slave girl and the crown prince was doomed from the start. Salim raised an army to fight his father for the right to marry Anarkali, but he was defeated. Just as he was about to be put to death, Anarkali sacrificed herself in his place.

He was one of Rome’s best military leaders; she was Egypt’s queen. Their passionate affair led to wars between their two nations, and they both committed suicide as their enemies stormed the city where they were living.

When they met, they fell in love. Too bad Guinevere was already married to King Arthur, and Lancelot served as one of his Knights of the Round Table. Their scorching affair helped to bring down Camelot.

Yup, that’s Richard as in the “Lionheart,” who was away fighting in the Crusades while his kid brother, Prince John, duked it out with Robin Hood back home. There’s controversy over whether or not Richard and Philip were lovers, but several contemporary accounts indicate that they were. They would have had to keep their affair under wraps or been labeled as “unnatural” during the intolerant Middle Ages. 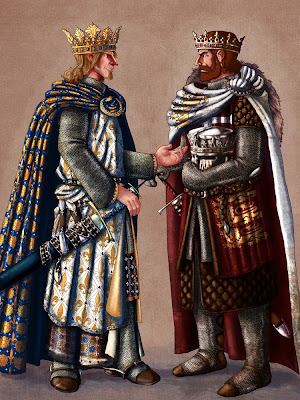 If you think an illicit affair between a nun and a philosopher sounds boring, check out their surviving letters—they’re among the most swoon-worthy passages I’ve ever read.

Famous poet Dante may have only met Beatrice twice, but he loved her for his entire life—even though they were married to other people. Too bad for Dante that divorce was a big no-no in medieval Florence. After Beatrice died young, Dante wrote a famous collection of poems in her memory, and she appears in his legendary work The Divine Comedy. Then-king Edward’s proposal to Wallis, an American socialite, created a constitutional crisis in the United Kingdom. No woman with two living ex-husbands had married a British monarch before. In the end, Edward abdicated the throne to his younger brother in order to marry the woman he loved.

In 1958, Mildred and Richard were a young couple who had just gotten married. The problem? Mildred was black, Richard white, and back then interracial marriage in Virginia was a crime. Their case was eventually brought before the US Supreme Court, which ruled that all race-based restrictions on marriage were unconstitutional. What are some of your favorite forbidden romances?