Here Are All The Important Things That Happened In Glass Sword 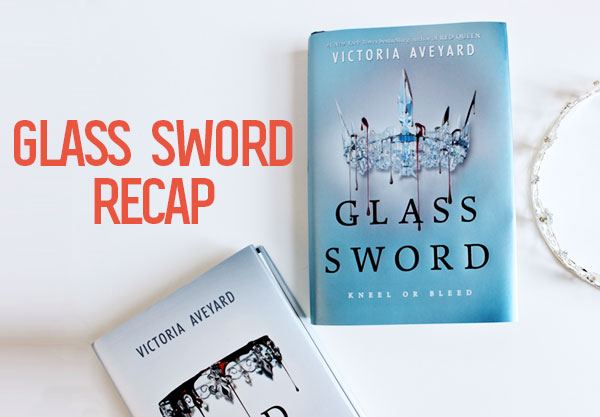 Are you really freaking excited to read KING’S CAGE but also freaking out because you can’t remember what happened in GLASS SWORD? Don’t worry, we’re always looking out for our fellow Scarlet Guard members and bring you another Red Queen series recap! And wow is there a whole lot of stuff that goes down in GLASS SWORD! There are epic battle scenes, really cool newbloods recruited by Mare, and a few shocking deaths. So stick with us as we revisit all the major moments because there are some KING’S CAGE teasers waiting for you at the end of this post! Need a refresher on book 1 first? Here’s Everything You Need To Remember (But Forgot) About Red Queen! HOLY FIRST TWO CHAPTERS
GLASS SWORD doesn’t waste any time and opens with a pretty intense battle scene. (You can re-read the first three chapters right here.) After escaping the Bowl of Bones, Mare & crew head to Naercey to rescue the rest of the Scarlet Guard while fending off an attack from Maven and his army. Maven puts a bunch of powerless Reds chained together at the front lines of his army because he’s horrible like that. Shade gets shot (he’s fine but c’mon give the guy a break he just returned from the dead!). The Scarlet Guard manage to escape into a submarine while Cal stalls Maven with a wall of fire. Cal 1, Backstabbing Brother 0.

The Scarlet Guard have set up camp on the island of Tuck. We meet Farley’s father, the Colonel, who doesn’t trust anyone besides Reds so he’s not the Lightning Girl’s biggest fan. The Colonel locks Cal up in a Silent Stone cell so Kilorn helps Mare break in to save him. But then Kilorn double crosses Mare and ends up locking her inside the cell with Cal. Tbh this scenario doesn’t seem all that bad…until Cal and Mare kill the mood by deciding they must ignore their feelings for each other and focus on their goal of taking down Maven. #priorities

Turns out sneaky sneaky Kilorn was only pretending to betray Mare to fool the Colonel. Kilorn stabs the Colonel with a tranquilizer, breaks open the cell and then Shade teleports everyone to one of the Scarlet Guard’s airplanes so they can set off on their mission to start finding the other newbloods like Mare.

Mare & crew break into the Security Center in Harbor Bay to look up names of newbloods in the surrounding area. There are a few close calls as they’re chased through the city while trying to track down a newblood, only to find his dead body hanging in a town square. If that wasn’t bad enough, Maven shows up with a horrible machine called a sounder that uses Mare’s lightning ability against her and leaves her scarred with lightning burns and unconscious for a few days. He also brands the letter M into her skin which is so effed up. Mare wakes up at their new home base in forest called “the Notch.” When Cal sees Maven’s brand on Mare, he promises he’ll never let Maven hurt her again. Cal and Mare kiss and Mare gives us the quote we could recite in our sleep because it still gives us chills, “If I am a sword, I am a sword made of glass, and I feel myself beginning to shatter.” But since this is a rebellion there’s still actual work to be done, so while at the Notch Cal has taken up the task of training the newbloods. Here’s a rundown on newbloods they recruit and their abilities:

Harrick disguises a few people so they can sneak into a house in Templyn where more newbloods are supposed to live. But the house is empty and Mare is horrified to find a dead baby with a note from Maven clutched in its hand. This first note from Maven says that he will keep killing newbloods unless Mare surrenders to him. Mare finds a second note on another recruitment mission where Maven assures her that any Silvers still loyal to Cal are “being dealt with.” Oh, and he creepily signs each note with “Until we meet again.” Mare hides these notes from Cal but does start sleeping in his room every night, and Kilorn gets very moody about it. (But nothing like that happens get your mind out of the gutter!) The Three-eyed Raven (jk this isn’t GoT. His name is Jon, last name NOT Snow)

Mare & crew arrive at a deserted village where they meet Jon, a powerful newblood Eye who can see the entire future. Jon tells them about how Maven and Queen Elara are holding newbloods and Silver dissenters (including Julian and Sara Skonos!) captive with Silent Stone at Corros Prison. Elara wants to study and manipulate the newbloods to use them to her advantage, so Jon says she must be stopped. No one knows whether to trust Jon but Mare decides they must take the risk and try to free the prisoners.

Introducing Cameron Cole
Jon refuses to join the band of newblood misfits but does suggest they make a pit stop at Little Sword Lake where they might find something useful. That something turns out to be a someone—Cameron Cole. She’s a newblood who escaped from Corros Prison and can silence other people’s abilities so severely that it can kill them. Cameron wants to go to the Choke to save her brother who has been deployed there with a legion of other young soldiers to fight in the war (basically a death sentence). But Mare forces Cameron to join her crew since she has insider knowledge of Corros. Cameron is our favorite feisty new character and doesn’t take shit from anyone, which is great because she is one of the new narrators in KING’S CAGE!

After a few days of planning, everyone heads to Corros for the prison break. Major stuff goes down in this scene and your heart will be racing the entire time, so if there is any part of GLASS SWORD that you reread, it should be chapters 25-26. But if you can’t, here’s your highlight reel: Mare is on the plane back to Tuck and sitting next to two dead bodies—Shade and Elara, who Mare electrocuted to death before leaving Corros. Farley, who was in love with Shade, gets into a fight with Mare and blames her and Jon for not preventing Shade’s death. Then Cal gets into a fight with Mare and basically calls her a monster for all her coldblooded killings in Corros, and accuses her of still having feelings for Maven since he knows she held onto all his letters. Now their relationship is all kinds of complicated…

We interrupt your regularly scheduled programming…

Back on Tuck, Mare wants to incite a civil war and records a video blasting out the truth about how she is a newblood and others must join the Scarlet Guard to fight and Rise, Red as the Dawn. She also holds up Elara’s decapitated head to show the strength of the Scarlet Guard in taking down a queen and reveals that Maven is a monster that has even been imprisoning Silvers. Yikes, don’t mess with the Lightning Girl!

Mare is going to lead a team to the Choke to rescue the legion of young soldiers. At Shade’s funeral, Farley hints that she’s pregnant and won’t be coming on the mission. As the team is flying to the Choke, their plan drops from the sky and is turned into a cage as it plummets to the ground. Mare and Cal lock eyes and share an adorable moment as they think they’re about to die. But then they are gently set on the ground and surrounded by Maven and the magnetrons of House Samos. Mare strikes a deal with Maven where she agrees to be his prisoner and he lets everyone else go free. Mare is taken to the capitol and is paraded in front of everyone in chains. She is led up to where Maven is standing on a platform. He points down to the ground and GLASS SWORD ends with the words “I kneel.”

AHHHHHHH how can we possibly process all that?!! And if you made it to the end of this blog post, Congrats!
Here’s your reward: we received a little intel from our friends in the Scarlet Guard who told us a few cryptic things that happen in King’s Cage.

Aaaaaaaand now we LITERALLY cannot wait one more second to read KING’S CAGE. February 7th where are you?!?!?!?!? So close yet so far awayyy.

What was your favorite moment in GLASS SWORD? Tell us in the comments below!
Save
Save
Save