Here’s How Tupac Inspired The Hate U Give

By now you’ve heard that The Hate U Give by Angie Thomas is the one YA novel you absolutely cannot miss. What you might not know is that The Hate U Give was not only inspired by the Black Lives Matter movement, but also largely by Tupac, his THUG LIFE tattoo, and his activism. Author Angie Thomas often refers to Tupac not only in her writing, but in her conversation surround The Hate U Give. Since Tupac was recently inducted into the Rock and Roll Hall of Fame, becoming the first solo rap artist in its history to receive this recognition, we wanted to take a moment to celebrate his life, art, and activism. And of course thank him for inspiring what came to be one of our favorite YA novels of all time.

What Is THUG LIFE?


“Pac said Thug Life stood for “The Hate U Give Little Infants Fucks Everybody. T-H-U-G-L-I-F-E. Meaning what society gives us as youth, it bites them in the ass when we wild out. Get it?” –The Hate U Give by Angie Thomas
In an interview with Cosmo, Angie Thomas said “When we were trying to figure out a title for the book, I came across a YouTube clip of him discussing THUG LIFE. […] When I when I saw him explain what it means, it hit me that that’s not just in my book, but that’s what we see in society. When these unarmed black people lose their lives, the hate they’ve been given screws us all. We see it in the form of anger and we see it in the form of riots. So when I saw that in the video, it was like a sign.”

Tupac and The Hate U Give 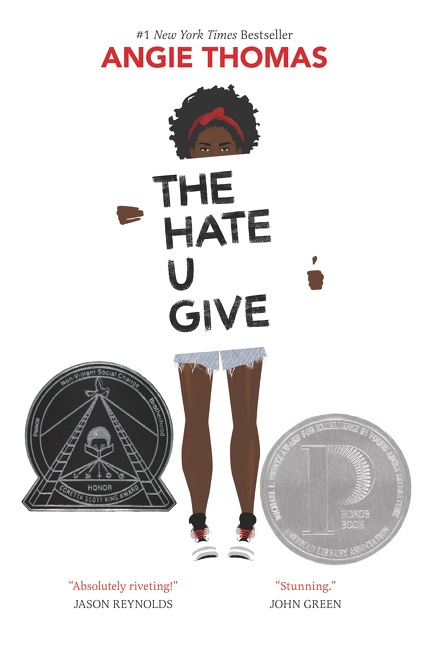 Though It’s obvious that that title The Hate U Give came from Tupac, there are many other hidden places in the book that Tupac inspired!

When deciding on a name for her main character, Angie drew inspiration from The Greatest himself. Though Tupac never had a daughter, he always claimed that he would name his daughter Starr. In a way, Starr is a tribute to the life of Tupac, and the daughter he never had. And in case you missed it- Starr sports a bandana on the cover of THUG, which can only be attributed to ‘Pac’s signature look.

If you read closely enough, you’ll notice that Big Mav is described to look exactly like the greatest- Tupac Shakur.

While writing the book, Angie claims to have listened to Tupac’s words of wisdom for inspiration. She says that in a way, Tupac and hip-hop showed her who she was- and aims to do the same for black youth with The Hate U Give. Tupac helped Angie to realize that her story mattered. That black stories matter. His revolutionary spirit and Activism allowed for Angie’s new perspective.

The Rose That Grew From Concrete

Tupac penned a poem called “The Rose That Grew From Concrete.” It’s a metaphor for young people who grow up in bad situations but are still something to be in awe of. Angie attempted to make Starr, Seven, and all the characters in The Hate U Give roses in their own ways.

Tupac Amaru Shakur was a legendary rapper who combined hip- hop with activism. Tupac’s mother, Afeni Shakur was a Black Panther, and shaped Pac to be the outspoken revolutionary that he is know to be. Despite his controversial lifestyle, Tupac quickly became one of the most respected rappers of all time. His album All Eyez On Me peaked charts all across the USA and in many ways began the intersection of rap and activism. Tupac was fatally shot on September 7th 1996, while he was leaving a prizefight featuring Mike Tyson. His death left a deep wound in the hip hop and activist community, which is still felt to this day. On April 7th, 2017, Tupac became the first solo rap artist in history to be inducted into the Rock and Roll Hall of Fame. “The seed must grow regardless of the fact that it’s planted in stone.” –Tupac Shakur
“Follow your heart, but take your brain with you.” – Tupac Shakur Are you as inspired by Tupac and The Hate U Give as we are? Tell us what you think in the comments below!